Home
Featured
9 Things The Tiny House Movement Has Taught Me 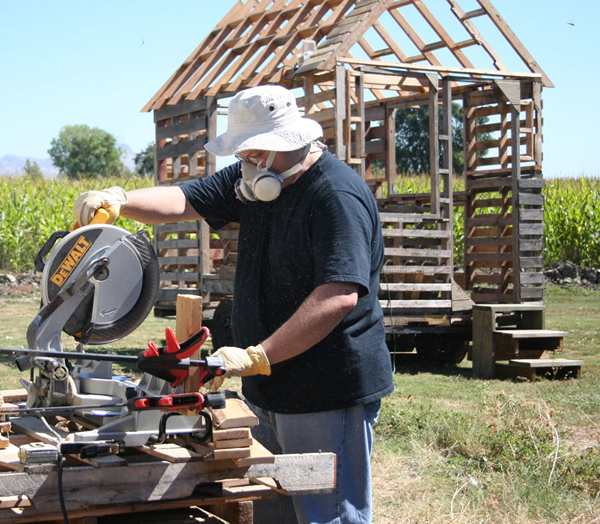 I first realized the tiny house movement was a thing back in 2007. The exact moment was when I saw Jay Shafer on Oprah. I’ve worked from home for years and my wife was out in the living room watching Oprah. She called to me that I had to see Oprah’s next segment on tiny houses.

After rolling my eyes and thinking, WTF is a tiny house? – I stepped into the living room and sat down to watch. I was instantly hooked. At the time I had also been watching my California home’s value evaporate and was waking up to the debt prison that is a traditional mortgage. I started blogging about tiny houses in 2008 – mostly as I explored alternatives to my own situation.

Eleven years later, a few key things stand out to me. They are lessons anyone can benefit from and don’t require living tiny – but can help you begin to apply tiny living to your existing lifestyle.

1. We don’t need much to be comfortable

After 11 years of blogging on the Tiny House Movement, I’ve seen and heard a lot of tiny houses success stories. Thousands of people have given tiny house living a try and through the telling of their stories have shown us it doesn’t take much in space & stuff to be comfortable. The hardest part isn’t adapting the amount of space, it’s our stuff.

At this point, I think the less stuff one has the happier they can potentially be. Stuff is a burden. It’s costly because it demands so much attention. In some cases people even put stuff in paid storage units – yeah I’m guilty of that too – and those monthly payments add even more actual cost to the mental toll of knowing that at some point that useless stuff needs to be confronted.

As far as I’m concerned, less stuff and less work to do around the house means more freedom and more comfort.

2. We can learn new things and create new opportunities

Back in 2008 tiny houses lit my mind on fire. The possibilities seemed endless. I drew design concepts like concrete pipe houses, houses with moving walls, bike houses, and nine square foot tiny houses. To get all those ideas on paper I had to learn to draw differently.

SketchUp was new back then… a 3D drawing program invented by Google for adding buildings to Google Maps. Today SketchUp is a favorite tool of Architects and Illustrators for creating 3D models and photorealistic renderings to help visualize ideas.

I taught myself to draw with SketchUp and it’s empowered me to draw all the tiny house plans and concepts I’ve published over the years. It’s now one of the skills I rely on for my own enjoyment and income.

I’ve seen many tiny homeowners learn new skills while building their tiny homes, like carpentry, metalwork, and even videography and web publishing.

Through the sharing of success stories on YouTube, we’ve all seen this transformation happen before our eyes. The projects folks choose to take on lead to new skills which in turn become new opportunities and take us to new places.

When the natural thing to do is to get a job to pay a mortgage and consume like there’s no tomorrow… and everyone around us is doing it… it’s almost impossible not to join in. Tax breaks, low payments, and the prospect of living in lavish digs also make it easy to jump on the debt carousel. For the paranoid, it almost seems intentional plot to enslave the free… but I digress.

If we truly want to be free, choosing freedom over debt-powered opulence is a tough daily battle in our own minds. Don’t give up the fight.

4. We all can learn something from stories of extreme downsizing.

One of the biggest lessons we’ve all learned from the Tiny House Movement is that there is an alternative to the debt carousel.

Every time we watch another success story about tiny house living, the idea that these tough choices might not be so tough after all. Once we implant those goals in our minds the conscious decision to be free gets easier to achieve.

5. We can design and build our own homes

If you were to try to build your own home in a highly-populated city that must conform to building codes, ordinances, and covenants – you’d be hard-pressed. The bar has been set so high, it usually takes a professional to build a large normal home.

But tiny homes are different. They can be built safely in a few months by average folks with skills learned along the way. It’s still a big project, but it’s achievable. We’ve seen it done time and time again.

Designing a tiny home isn’t rocket science either. You’ll likely need to learn some new skills, and spend a lot of attention on each square foot – but in the end designing and building your tiny home is doable.

6. Tiny Houses are too small for most people

Not everyone can fit their lives inside a 120 square foot home. Tiny homes work for singles and couples best – but only when they truly embrace a frugal lifestyle. The more people and functions you add to the living space the more space you need.

A family with parents that work from home and children that home school is a perfect example of a use case that stretches tiny living to the limit. We’ve seen it done, there are many families that have successfully made this situation work inside bus conversions and tiny houses, but it’s not easy, takes careful planning, constant organization, and a lot of patience.

So while tiny houses may be too small for most people we can all see the benefits of living tiny and apply it to our big homes. Reducing waste, energy consumption, and the amount of stuff we surround ourselves with brings us more freedom and lowers living expenses. We can all begin to live tiny in the space we’re in today… and once we make a step toward downsizing it becomes even easier.

7. Bus conversions might be a better option for those that want to travel

Tiny houses are heavy and not very aerodynamic. They are also usually made mostly of wood, so not as strong as a steel school bus, which is made to carry heavy loads safely for many years.

Bus conversions have been around a lot longer than tiny houses too, and it makes a lot of sense – especially if you want to travel. They are simple mechanically, so can be repaired relatively easily. They provide a decent amount of headroom, making them livable. They have open interiors that can be easily outfitted with the comforts of home.

The main drawback is aesthetics. A tiny house is super cute and feels like a home inside and out. A bus is a bus and it feels like one inside – even when comfy cozy. While the bus is more functional as a traveling home, the tiny house wins the beauty contest – or is it a matter of taste? You decide.

8. VanLife might be best for those that want to travel

VanLife has captured a lot of peoples’ imaginations. The idea of being young and free again and hitting the road for an endless adventure is a captivating idea.

I suspect it’s a lot tougher than it looks but you have to admit, if you have travel and exploring on your mind it’s the only way to go. Anything larger than a van would limit where and when you can stop, but a van – especially a stealthy one – can camp almost anywhere.

The obvious draw back to VanLife is space. A van’s interior makes tiny homes looks cavernous and luxurious – so fully embracing extreme downsizing is required.

One trend I’ve noticed is that tiny houses have gotten a lot more luxurious and expensive over the years. Back, in the beginning, it was common to see people build their own homes for less than $10K and fully optioned homes for $20K-$25K.

Today it seems like $40K-$50K is the norm and professionally built tiny homes are often in the $75K-$100K ballpark. Why is this?

I think it’s simple… people want their cake, (and pie, and cookies, and pudding), and to eat it too. People are addicted to stuff and living large… the temptations are all around us and it’s hard to not get sucked into wanting more More MORE.

It’s like an addiction and it’s crept into the tiny house movement too. For these folks, the benefit of the tiny house is that the scale makes all the goodies more attainable.

Nope. Just pointing out that the Tiny House Movement has become a much more diverse place with a wide range of people and values. No really, I like my cake and dontus too.

Tiny houses are not a one-size-fits-all dream. In the beginning the pendulum had swung all the way to the frugal side. Today it’s swung to the other side with more opulent options. But between those two extremes there are options for even more people, needs, etc.

But as diverse as the Tiny House Movement has become, this is just the tip of the ice berg of all the alternative housing options available to us that embrace many of the core values of living tiny – and more.

These learnings are a big part of why I’m shutting down my tiny house websites and focusing on this blog. It’s the core values that I’ll move forward with… and I won’t be focusing just on size.

Be sure to subscribe to my new email newsletter at michaeljanzen.com.

What have you learned from the Tiny House Movement? Leave your comments below.