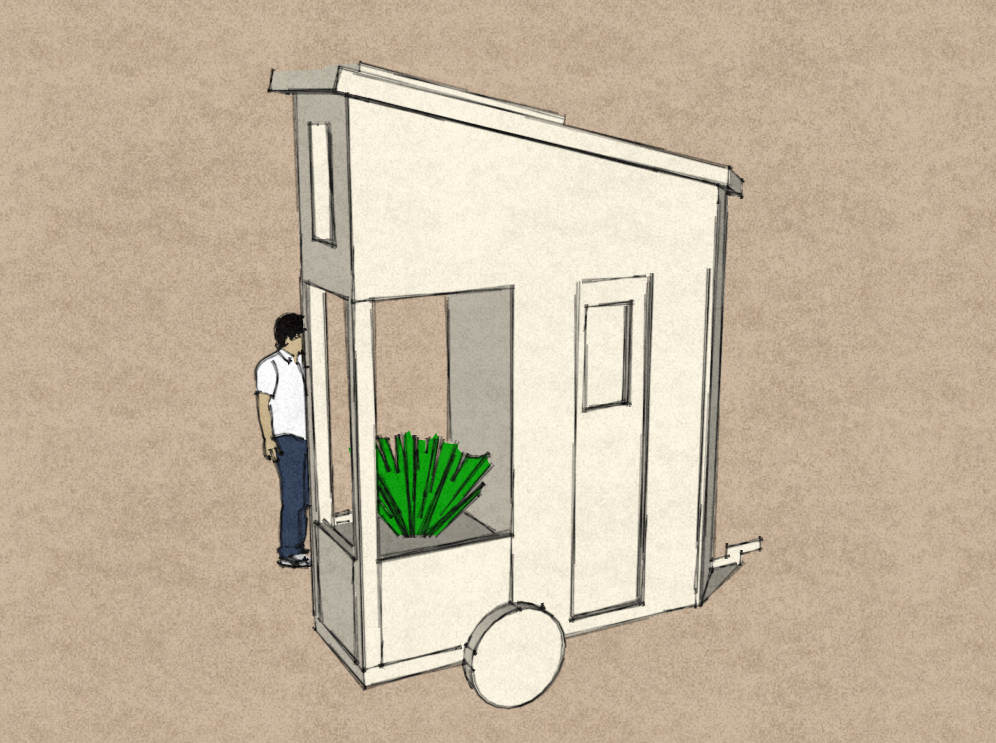 One of the more extreme design concepts I actually want to build is an ultra-tiny house called Nine Tiny Feet. It’s a nine square foot house plus a sleeping loft. It would contain all the necessary things a house needs like a toilet, shower, stove, refrigerator, sink, bed, chair, desk, and some storage. I’ve posted other ideas for how this micro house would look but this new design has been brewing in my head. I took a few minutes to draw it for you.

The main floor would measure 24″ by 48″ with a 1-square foot triangular space toward the front of the house. This triangular nose plus the shed roof would make this house much more aerodynamic than previous designs too.

The toilet would most likely a sawdust toilet. In the drawing it looks like the toilet is always open but there would be a hinged cover that seals it up when the occupant is using the toilet as a chair. There could even be venting to keep the house from smelling too much like compost.

The kitchen would include a 12VDC cooler below the sink and alcohol stove.  A few cabinets for food storage would be above the counter. I also imagine fitting a 5 gallon water jug above the sink but forgot to add it to the drawing. Everything on the lower level would also need to be water proof for when the occupant took a shower. Notice the shower drain in the floor.

Above the main living area is a short loft. Just like a normal house this loft space is not technically included in the square footage calculation because it is not tall enough to stand up. Unlike the previous designs this one does not have bay windows which is another way to add more space without technically adding more square feet.

Out back under the loft is a gray water soilbox that recycles the waste water. There would need to be some kind of catch basin below the shower drain in the floor to hold the water until it can be pumped into the soilbox.

I didn’t draw it but I’ve also imagined that there would be a way to harvest rain water. Also on the roof would be a solar panel or two and would provide all the electricity.

Nine Tiny Feet is to houses what ultra-light backpacking is to camping.  It’s a fully self-contained portable house that uses the least amount of space to provide a useful and habitable home. It’s not an ideal home to say the least, just an extreme example of how small a house could be.

If you have any feedback or suggestions for squeezing more into less space I’d love to hear them. For example I’d love to get rid of the loft but that would mean for a six-foot person to lay down the room would have to be 18-inches wide, and I’m really trying to avoid the shape of a coffin.

Update: I posted a few more screen captures of Nine Tiny Feet on the project blog.