Home
RV
Andersen Hitch Failures (Should You Worry About It?)

Andersen Hitches may be a prominent brand, but their products are often prone to hitch failure. Although it’s possible to purchase a hitch from this company that works just fine, it’s more than worthwhile to get familiar with the potential failures of the product that could occur.

Read on as we deconstruct all the potential failures of Andersen Hitches! 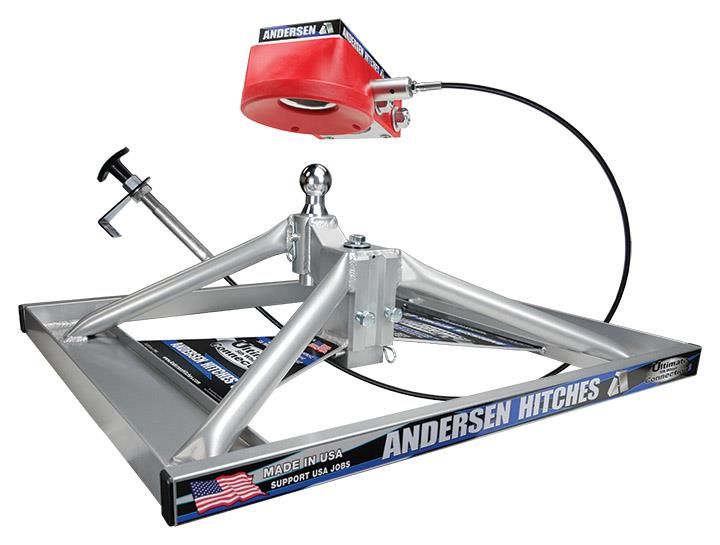 Andersen Hitches are generally safe – they wouldn’t still be on the RV accessories market today if they had been deemed to be completely unsafe. The Andersen Ultimate Hitch is a 5th wheel, ball and coupler hitch that uses tensioned swing bars and chains.

It features several safety features, including anti-sway, which means that the hitch does not sway uncontrollably when faced with wind or other forces. For smooth, easy driving, Andersen should provide you with a suitable hitch solution.

Andersens are also made from aluminum, which provides them with a sturdy, but not too heavy, build. They are also noted for the minimal sound they produce when driving on the highway, being less distracting than some other types of hitches.

However, it’s impossible to ignore the number of hitch failures that do occur to Andersen models, from funnel failure to back window damages.

There is a number of safety issues that surround this product that have caused minor to extreme problems for people on the road. Andersen Hitches are prone to fail when you have to hit an emergency brake. They also lack the clearance to make it a suitable hitch for the likes of a short bed pick-up truck.

Another regular complaint of Andersen users is the number of times that the funnels fail and have to be regularly replaced. The safety chains, too, have been known to break and cause issues.

This type of hitch will also likely break in the event of contact with a physical object or another vehicle, being made from aluminum and not steel, like most other hitches. Because they are built using predominantly aluminum, Andersens are undeniably cheaply built.

It’s impossible to determine the exact failure rate of Andersen hitches as the majority are only minor and go unreported. Most drivers deal with the hitch failure themselves without reporting it or taking Andersen to court. There have been no major court cases involving damages caused by an Andersen failure.

If you’ve decided to try out an Andersen for yourself, familiarize yourself with the following common failures that you may have to deal with:

Andersens are prone to bucking when attached to an RV and other big vehicles, particularly when braking and accelerating. If you notice a considerable amount of bucking, you should tighten the top bolt of the hitch.

Even when driving at a moderate pace on smooth roads, Andersen hitches have been known to occasionally shift and twist unprovoked. Having the hitch twisting and shifting uncontrollably when driving obviously could cause major problems for yourself and other drivers.

In order to fix this problem, you should re-install and torque the top bolts and set bolts, pushing it as far forward as it can go while doing so. Refer to your user manual for further instructions.

Small vehicles will likely suffer from clearance issues when using this type of hitch. If you are experiencing clearance issues, it’s best to invest in an alternative hitch more appropriate for the size of your vehicle.

The funnel is definitely the part of the hitch that is most susceptible to breakages and is known to snap on within a short while of first using the hitch. Under warranty, Andersen will send you out a new funnel should it break. However, this doesn’t exactly help if you’re already out on the road. For this reason, we’d recommend investing in backup funnels.

The coupler has been known to cause a number of problems for users of this hitch type. Commonly, the ball often gets lodged inside the coupler, which can make it difficult to unhitch. In order to free the ball from the coupler, you need to be on level ground and jig the ball around until it frees itself. This can take a while and you may need special tools to get the ball unstuck.

Damage to back window

If you have to make an energy stop or turn too quickly, the hitch may crush in on itself, and cause damage to the rear of your car. The light, aluminum build doesn’t handle sudden pressure well, and could easily break due to something as simple as turning a sharp corner. In a worst-case scenario, this could dent the back of your vehicle or shatter the glass in your back window.

Andersen hitches cannot be loaded haphazardly; careful planning needs to go into the loading process in order to ensure an even weight distribution is maintained. A lot of the problems to do with these hitch types on the road stem from them being too heavy on one side. Due to the hitches’ lightness, it suffers greatly from uneven weight distribution.

Do You Need Safety Chains For Andersen Hitches?

In terms of legality, you may need to fit chains on your Andersen hitch depending on what state you are driving in. The local jurisdiction of a state may specifically state that you need chains for this type of hitch.

Although it may not be policed or enforced in all states, we recommend investing in safety chains provided by Andersen in order to provide an extra layer of safety.

So, Are Andersen Fifth Wheel Hitches Any Good?

Despite the drawbacks, an Andersen Ultimate Hitch has a lot of good points that make them still worth considering. For one, an Andersen is as easy to install as they are to remove. If you only occasionally use your trailer, we’d definitely recommend investing in an Andersen gooseneck hitch as they are simple to attach when needed.

Secondly, if you’re looking for a simple, 5th-wheel hitch and are planning on embarking on a smooth, cross-country drive, the Andersen should provide you with everything you need. Although neither the heaviest nor sturdiest, the Andersen is a reliable hitch that can take you across the country with minimal failures. This hitch type is also relatively affordable.

However, if you are looking for a long-term, everyday and reliable hitch, we’d recommend investing in a more expensive, steel-based hitch. For example, a B&W stainless steel hitch is perfect if you’re looking for a hitch to use daily and with minimal risk of failure.

The Andersen simply has too many risky points about it to recommend it as a high-grade hitch, but it’s worth trying it out for yourself.