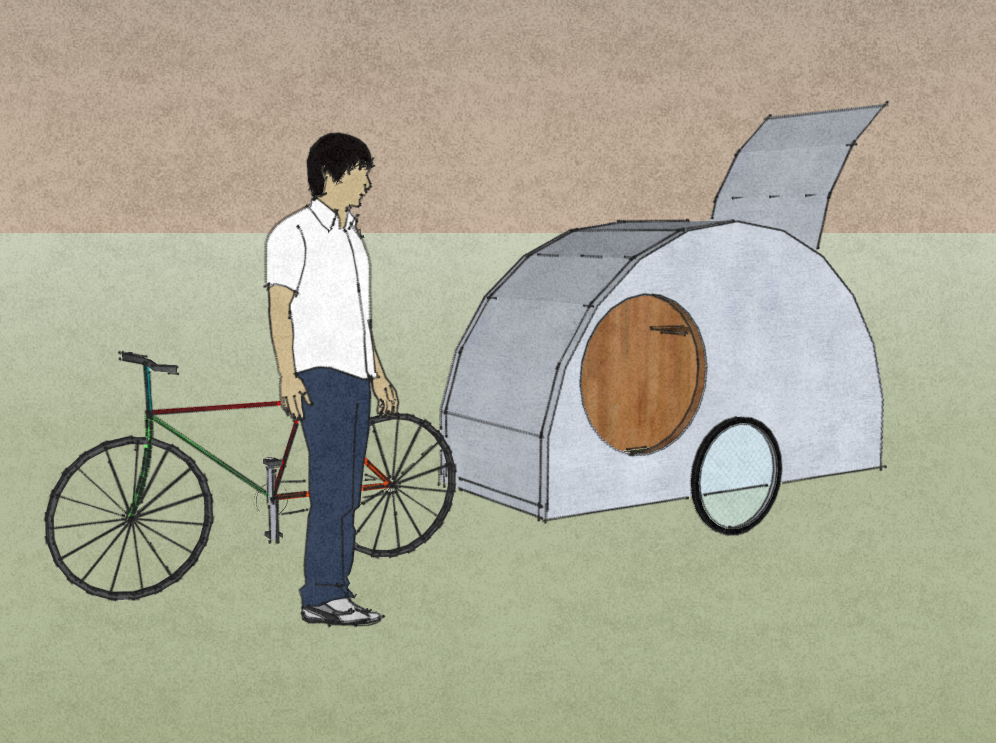 Well if you didn’t think I was crazy before… let me introduce you to the teardrop trailer for a bicycle. Don’t get too excited and whip out any credit cards this is just a crazy idea and I’m certain many bicycle enthusiasts will tell me a some very good reasons why this is just plain silly… but it was still fun to draw and day dream about.

The idea is simply to have a tiny habitable trailer that is lightweight and aerodynamic enough to be pulled by a bicycle. I found a few cargo bike trailers on the web but Logan at RowdyKittens pointed me toward a little company in Eugene Oregon called Human Powered Machines that makes some very stout bike trailers that can carry up to 500 pounds. Logan and Tammy at RowdyKittens have been living car-free for quite some time now.

To build such a trailer you’d need to start with a heavy duty custom bike trailer that is about 8-feet long and 3-feet wide. I’d then put down a floor and erect two curved side walls made from thin plywood (or OSB) and bond a sheet of polyisocyanurate foam board to the outside. Then I’d cover the arch with more wood, build the doors and window, and finally cover the exterior with a thin layer of aluminum. Since the length is just under 8-feet and the height is 4-feet, each side wall could be cut from a standard 4′ by 8′ piece of material.

The interior is long enough for a 6-foot person to sleep and their feet would tuck under the kitchen area. There’s a little shelf or cabinet inside for personal items too. Around back the kitchen area would provide a place to store and prepare food. The rear hatch hinges up like most traditional teardrop trailers.

You could add a couple small solar panels on the roof but you’d probably want to spend the extra money and buy lightweight batteries. Lead acid batteries would probably become a real bummer after the first few miles.

Is this totally crazy? Could this work? How can you imagine using such a trailer?