Airstream’s trailers are legendary for their shiny exteriors and curved bodies. Often referred to as the “silver bullet,” they are crafted from high-grade aircraft quality aluminum riveted over a steel frame. They are an iconic American image. 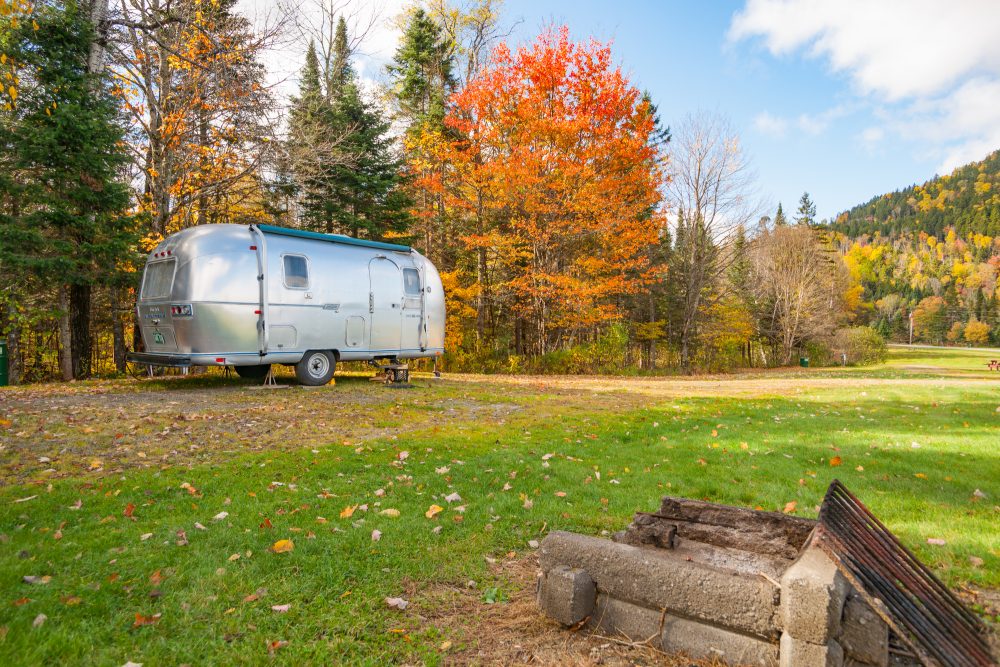 Each of the 3,000 rivets is put in by hand, resulting in a comfortable, leak-proof environment. Airstreams can last 40 years or more, which twice as long as the typical lifespan of a convention trailer.

Wally Byam founded Airstream in 1931. He had built his first trailer two years before that for his wife, who didn’t enjoy sleeping in a tent on the ground. His first attempt was a tent-type contraption built on a Model T chassis that wasn’t a hit with the love of his life. Byam went back to the drawing board and built a teardrop-shaped trailer with a sleeping platform, ice chest, and stove on the same platform.

As its name suggests, Basecamp trailers are designed to be the place where adventurers return to after a long day of exploration and fun. The Basecamp series is perfect for people who love an off-grid life but still like to have comforts within reach.

The Airstream Basecamp can be pulled by SUVs, trucks, and vans, but understand your vehicle’s towing capacity. There are two different trailer weights to consider – dry and wet. This can be confusing, so here is an explanation.

Is the Airstream Basecamp Worth It? — Let’s Look at Reviews

Airstream Basecamp trailers receive consistently positive reviews. Its unique single axle and aerodynamic design give it versatility not found in other campers. The first thing that most Airstream owners comment on is how light it is, which makes it very easy to tow.

The stabilizer jacks are easy to set up and are a hit with Basecamp owners, as are the 12V tank heaters and the heated underbelly that keeps intrepid winter campers warm and comfortable.

Explorers are also keen on the modern, sleek interior of the Basecamp series. The Basecamp Airstreams have a clean, shiny feel inside and out which strays a bit from the interior designs of more traditional trailers.

The Basecamp series has been carefully designed with function in mind. The old saying, “A place for everything and everything in its place” holds true for the Airstream Basecamp series. There are plenty of small cupboards and spaces in the Basecamp models that accommodate everything you need and much of what you want.

Storage spaces are found under the lounge seating, on both sides of the trailer behind glass doors, and on the outside of the trailer.

The Airstream Basecamp series remains popular because it’s perfect for Overlanding, remote camping, boondocking. Yet it’s doesn’t sacrifice comfort or luxury. Folks have discovered that hitting the road with a trailer is a fabulous way to travel while staying safe during a pandemic.

You can live life in the slow lane and on your terms. It is a mobile kitchen, office, and bedroom.

If the cost of a new Airstream Basecamp is out of your budget, renting one is a great option, particularly if your off-grid or camping adventures are limited to only one or two treks a year. In this case, it makes perfect financial sense to rent.

Most RV rental companies offer the Airstream Basecamp at prices that range from $140 to $225 per night. Outdoorsy is one of the many places online where you will find Airstreams for rent. 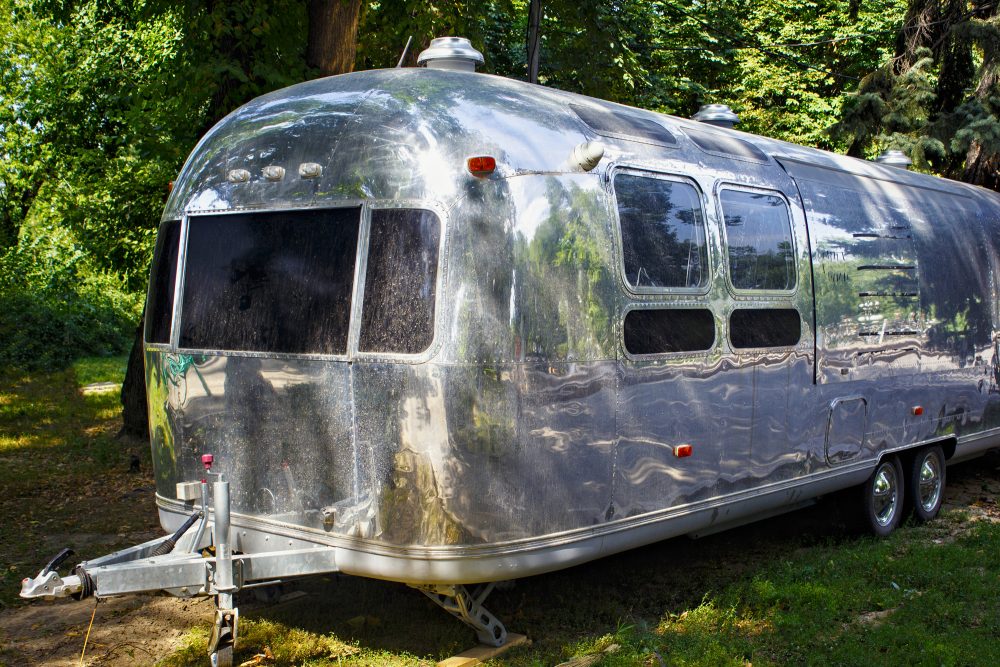 Alternatives to the Airstream Basecamp

While Airstream is an American icon, it’s not a trailer that fits everyone’s budget. If you’re looking for a great, less expensive alternative, you’ll want to check these out!

The HC1 is a mighty little, one axle, lightweight trailer that starts at $34,450. This model has a retro appearance and offers a wide entry door and a large rear hatch. It also has a large panoramic window that lets in lots of sunlight, making the interior appear roomier than it is.

The HC1 is unique because it has a trademarked Adaptiv System that allows owners to change interior configurations as their needs and wants change.

The Dub Box campers are all about retro. From the outside, it looks like a VW van from the 1970s, and that is what Dub Box wants. Colors are customized to match your vehicle, and they pay great attention to retro reproduction detail.

Dub Box also has a smaller model called the Dinky Dub camper. At just 9 feet long, it is designed for sleeping and relaxing in comfort. It doesn’t have a kitchen or stove option, so you will have to be prepared to cook outdoors under an awning of some sort. The Dinky Dub starts at a reasonable $18,625.

The Timberleaf Trailers are among the cheapest and lightest trailers on the market. They can be pulled by most small cars and even a more powerful motorcycle.

On the outside, they look modern, even futuristic. And yet inside, the warm wood paneling gives off the feel of a cozy cabin. The Pika is Timberleaf’s latest model and weighs in at just 1,025. Starting price for this model is just $12,000.

Food prep happens in the outdoor galley kitchen via the back hatch. The kitchen has a 12V outlet, 4 USB ports, and a GFI outlet. The led lighting keeps things bright, and a skylight will allow you to lay in bed and watch the stars.

Why is Airstream expensive?

The Airstream’s famous aluminum body is what makes it expensive. The trailer is insulated, and then another thin layer of aluminum is riveted from the inside. The construction of the trailer is time and labor-intensive because each rivet is punched by hand.

This is quite different from traditional fiberglass RVs that use one-piece composite walls that are assembled and installed quickly. Airstream customers pay for the quality material and for the time it requires to make each trailer.

Airstream trailers are also completely built before any interior furnishings or components are brought inside. Once the shell is done, the interior is then finished. This is the opposite to other trailers, where the interiors are finished before the walls are put up.

The only plywood found in an Airstream is on the subfloor, and it is well protected from any rot due to the double framing.

This attention to detail also increases longevity, and if an Airstream owner decides to sell at some point, they can expect a decent return on their initial investment. In 2006, Airstream stated that an impressive 65% of all their trailers were still on the road.

What is the cheapest Airstream Basecamp?

The least expensive Airstream Basecamp is the Basecamp 16, which starts at $43,900.

Where can you buy used Airstream Basecamps?

Purchasing a used Airstream Basecamp is another avenue, but you’ll have to shop around for an inexpensive one. The features that make Airstream so great are quality and longevity, but on the flip side, that is also what makes buying a pre-owned one, not as budget-friendly as you might hope.

There are RV trade sites online, but be prepared to spend some time searching and waiting. When you see one in your budget, you’ll need to act quickly because inexpensive Airstreamsare snapped up quickly!