Home
Cooking
Every Tiny House Should Have a Solar Oven 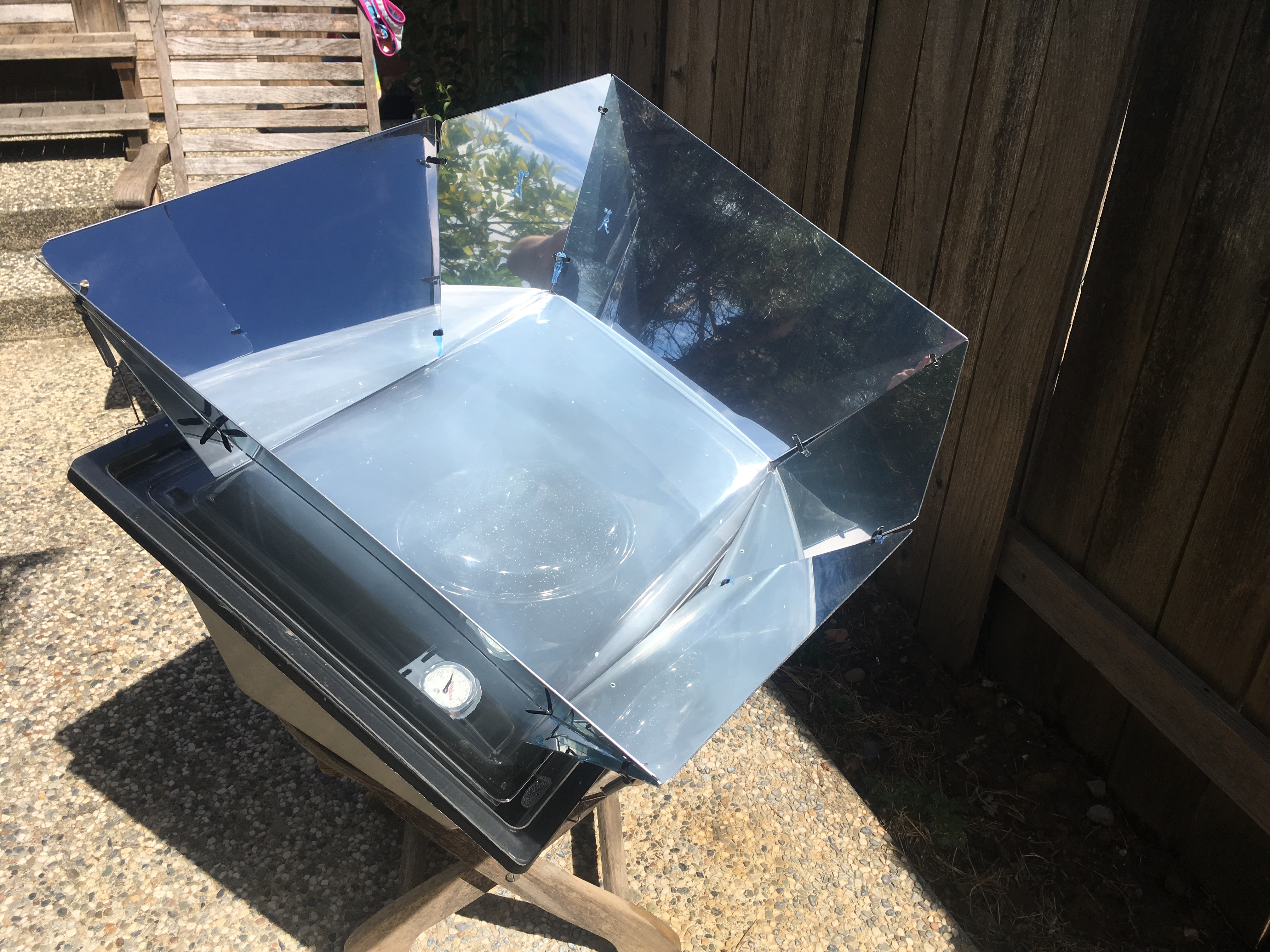 The folks at Solavore sent me a solar oven to test – a Solavore Sport. This is not a paid promotion, they just sent it to me to review with no strings attached.

My first hand-on introduction to solar cooking was back in the early 1990’s when I was in college. I lived in Albuquerque, New Mexico in a back house – a tiny house in a backyard. My landlord – Jay – lived in the normal house in front. He was an engineer but had a solar oven hobby which I walked by everyday after class.

Jay’s solar oven was made from a cardboard box, aluminum foil, foam board, and the back side window from a volkswagen beetle. It was a funky little solar oven but he won awards with it cooking food just as good as the professionally made solar ovens of the day.

You can still build a funky little solar oven yourself with junkyard scraps like Jay… or you can order one on Amazon and get cooking right away with virtually no effort.

The real trick is to get an air tight seal and lots of light into the insulated box. I asked Jay one day why his solar oven never caught on fire. He asked me if I had ever read the book Fahrenheit 451? I didn’t get it… so he explained… paper doesn’t catch fire until 451-degrees F.

Jay’s solar oven never really got hotter than 260-270 F. So no… solar ovens don’t catch fire, but the pots inside can burn fingers. The Solavore oven got to about 260 F.

The hardest part of setting up the Solavore solar oven was peeling the blue film off the mirrored reflector that helps guide the sunlight into the oven. But you only do that when you set it up the first time.

The hardest part of cooking in the oven is preparing the food – and waiting two or three hours for the food to be done. My oven came with a travel case, reflector, and two small cook pots. So far I’ve cooked potatoes & onions twice and beets once. I overcooked the beets but they were delicious.

If you’re considering tiny house living you should consider a solar oven. They are a little bulky so save some space in your outside storage cabinet for it, and I think you’ll be happy to have this added cooking option.

As I cook and back more in my oven I’ll post updates. Below are some photos of what I’ve cooked so far. 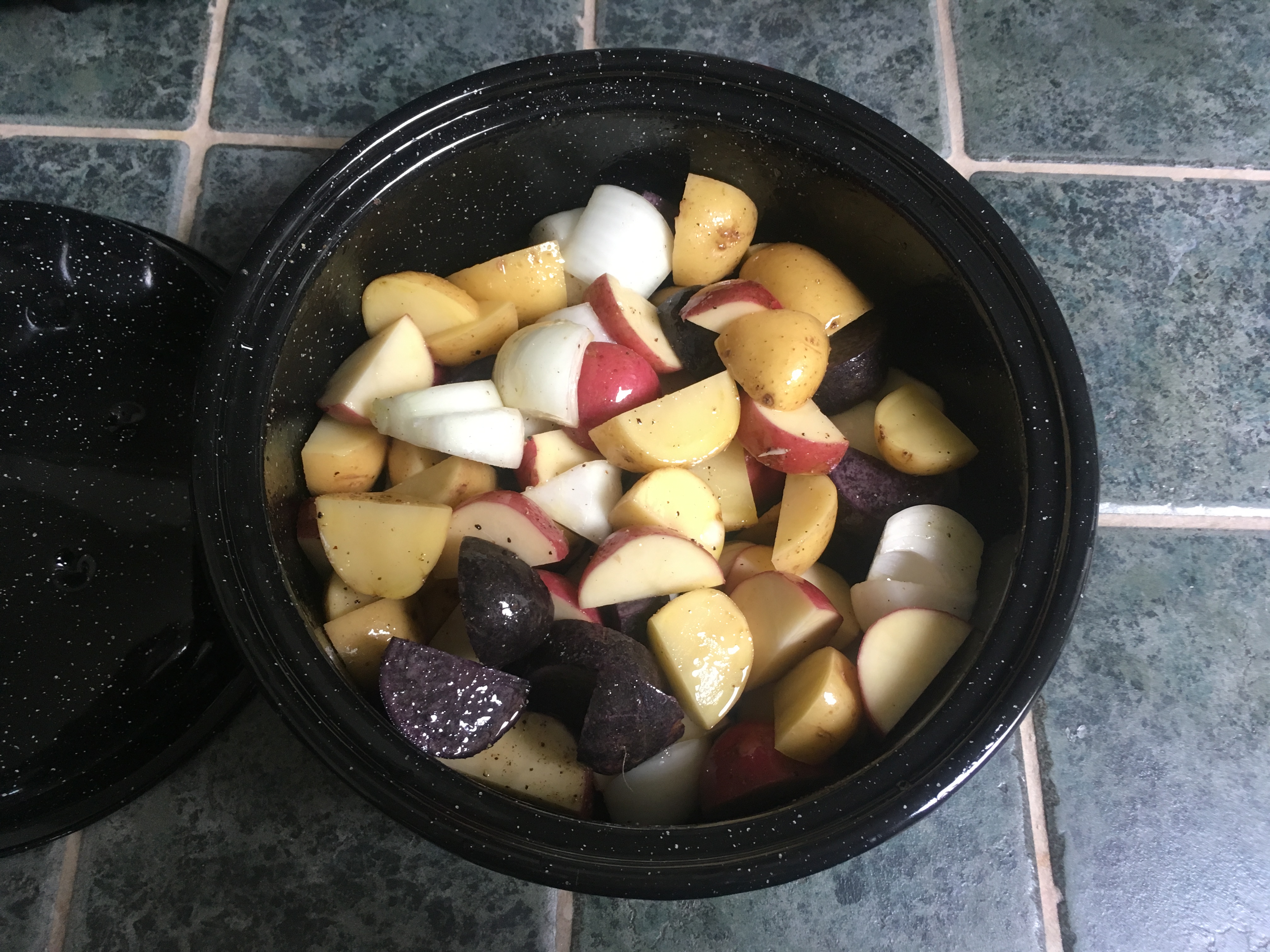 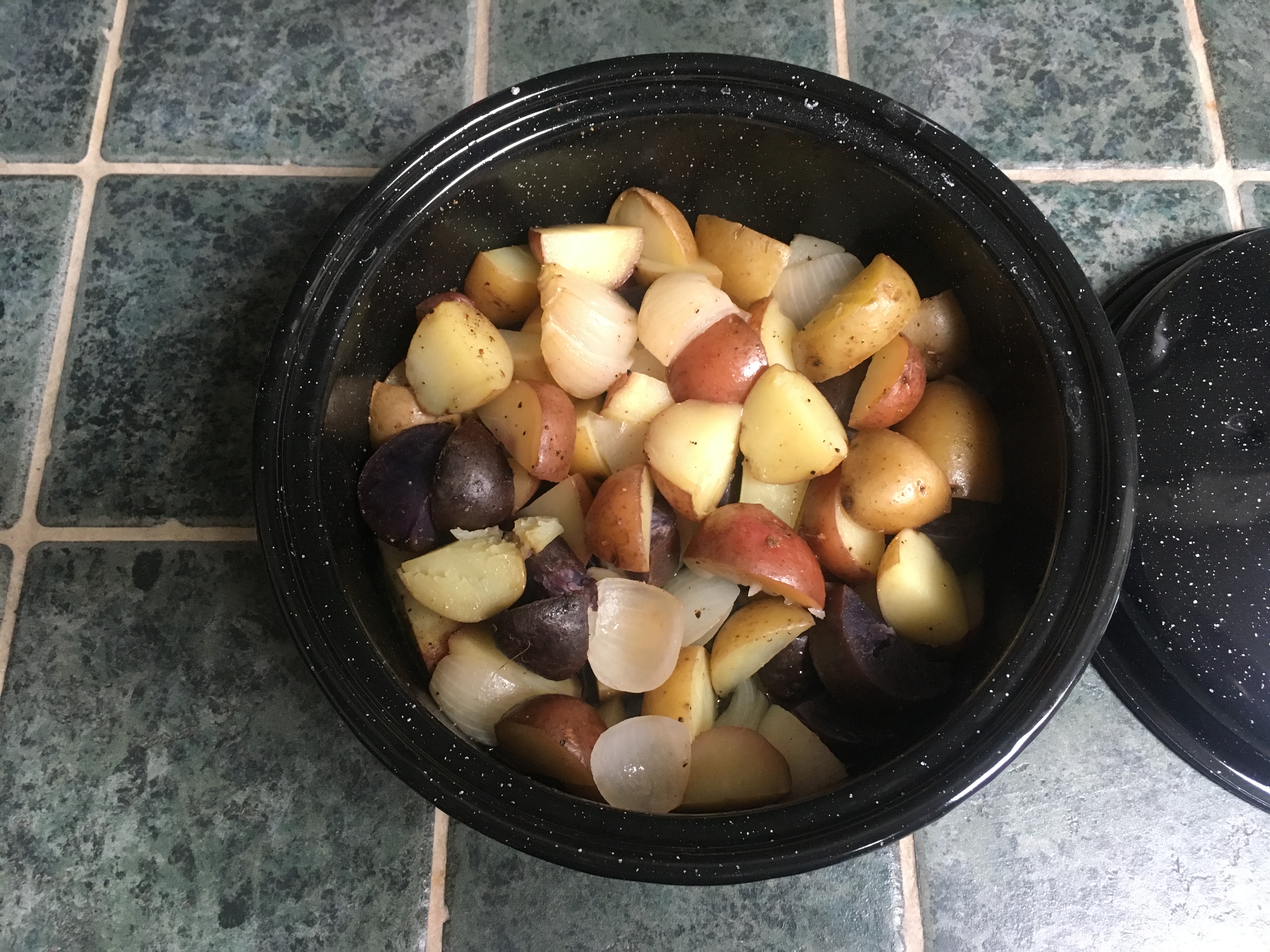 Above: Beets before. Below: Beets after. 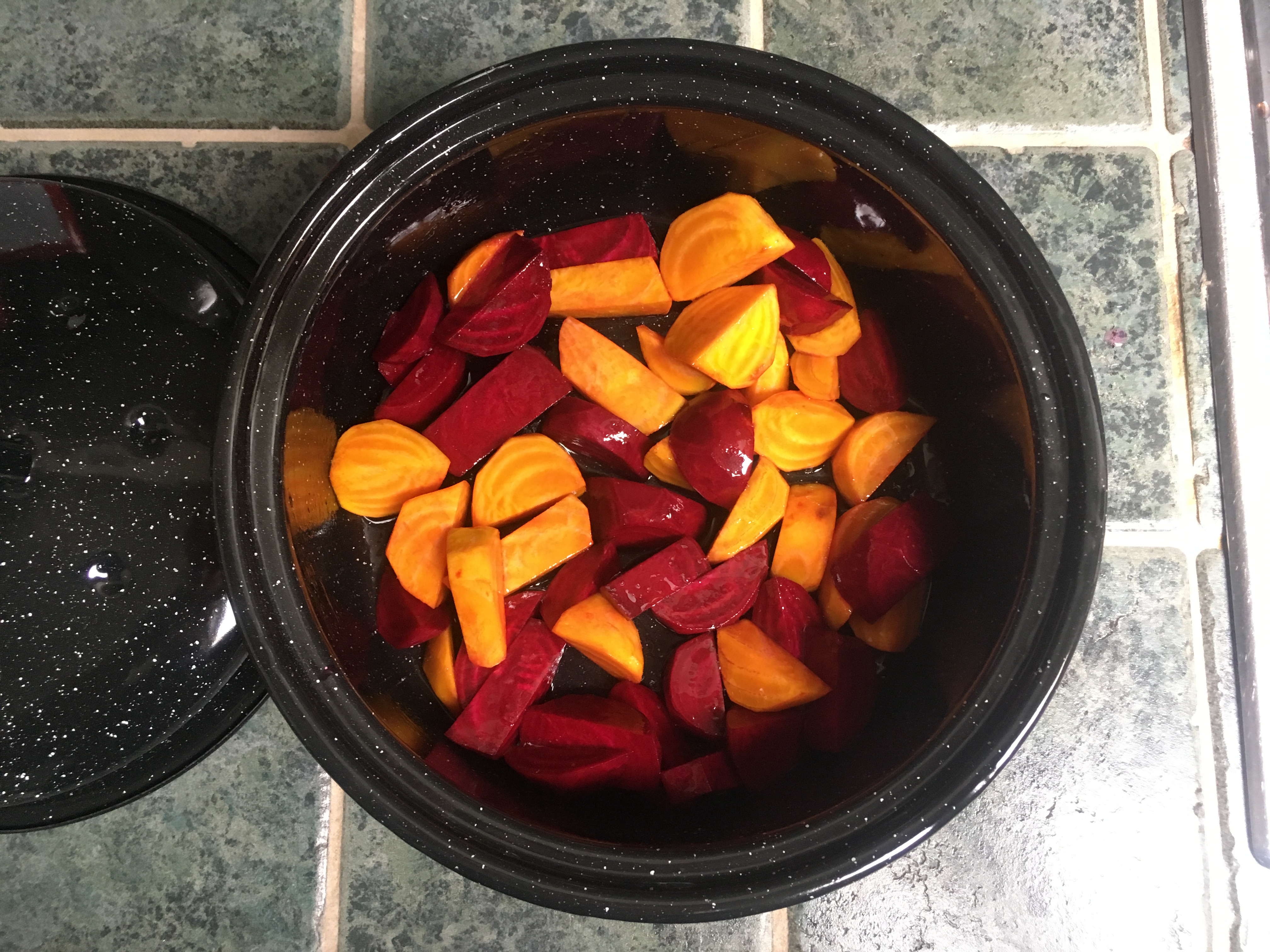 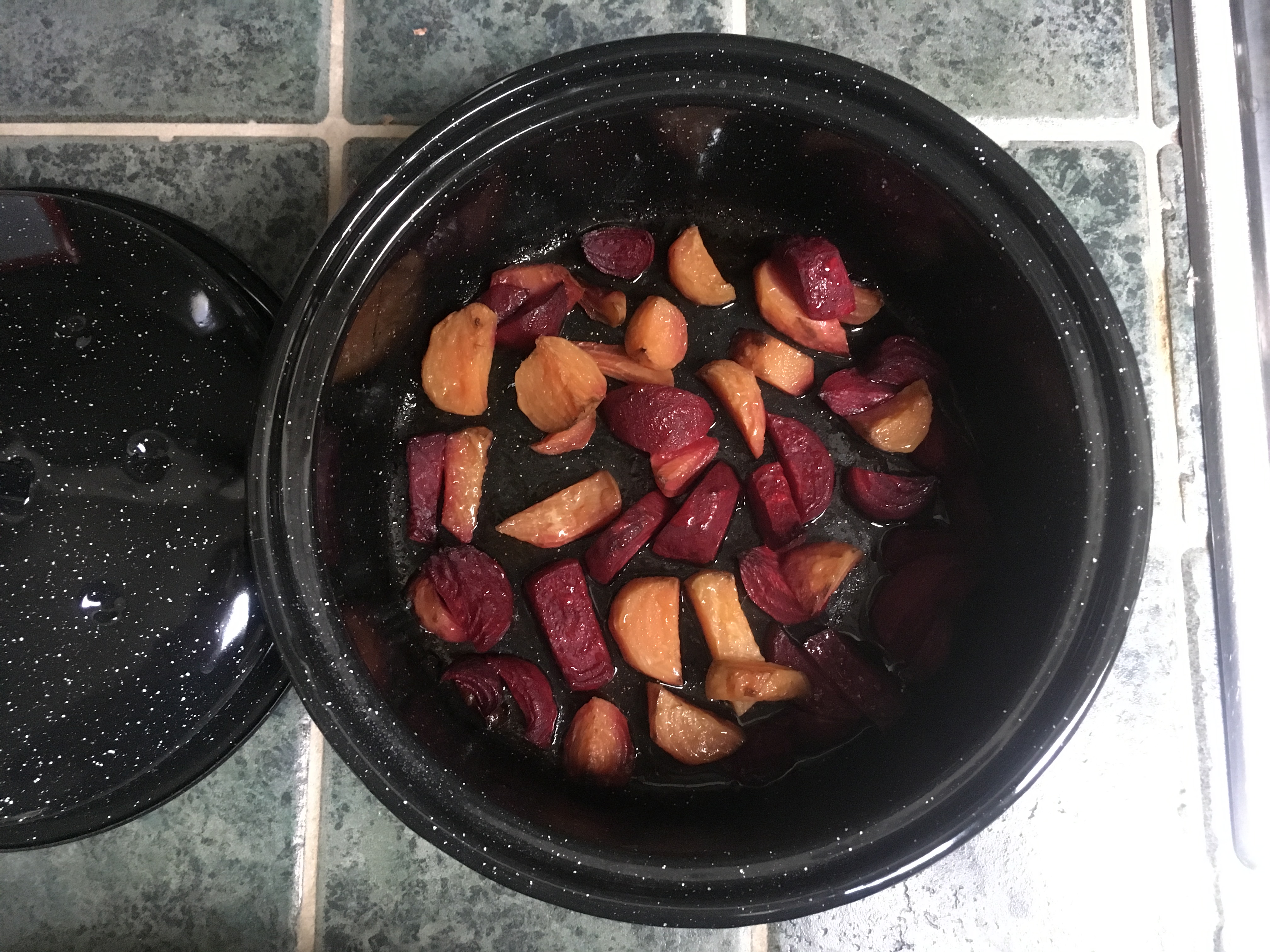 Here’s a quick shot of the thermometer at full sun power! Remember… while our gas and electric ovens can easily reach 500 F we don’t need it if we have time. The internal temperature of food is what we’re after – and that’s well below 260 F. So cooking food longer and at a lower temperature works fine. 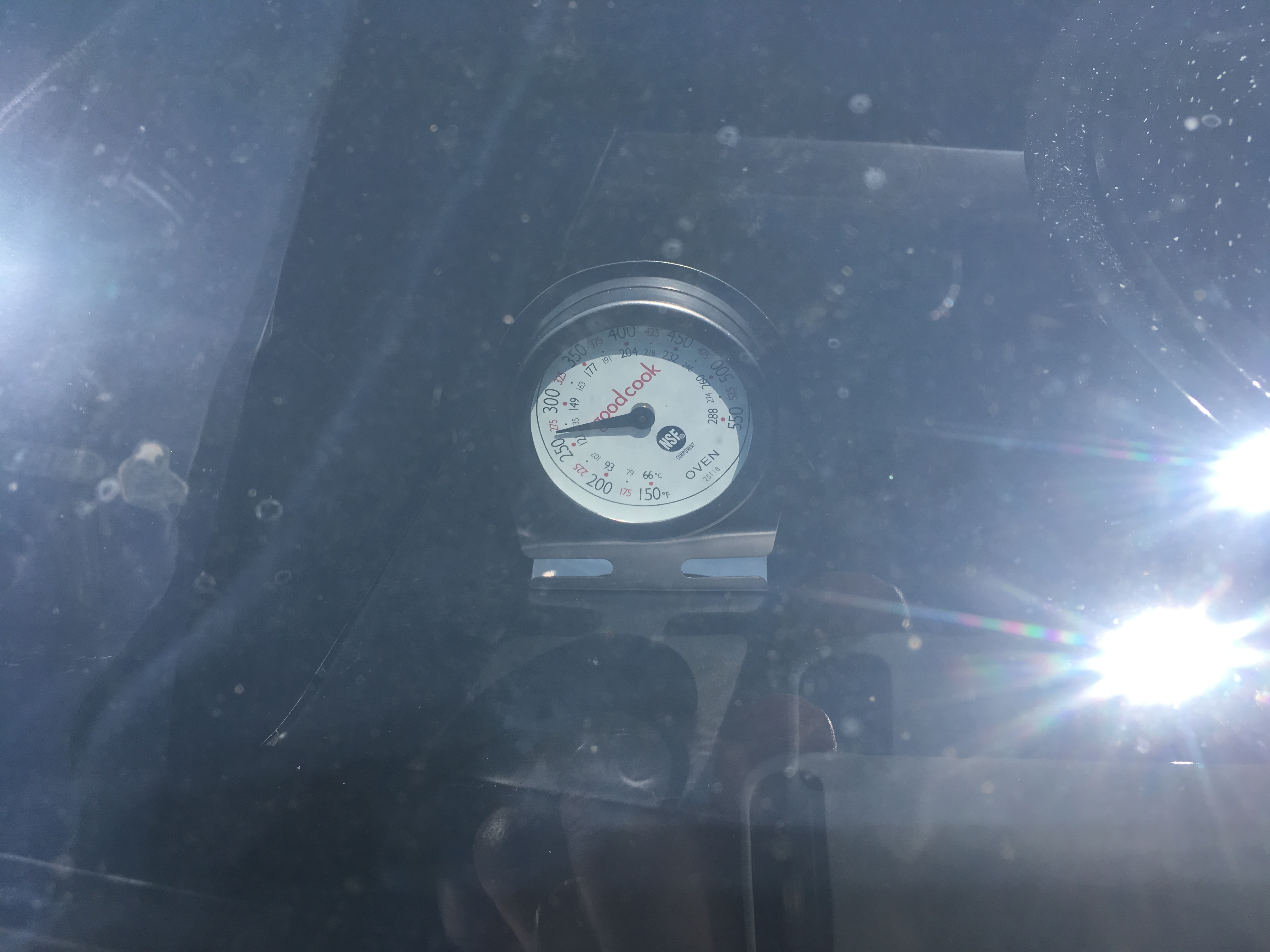