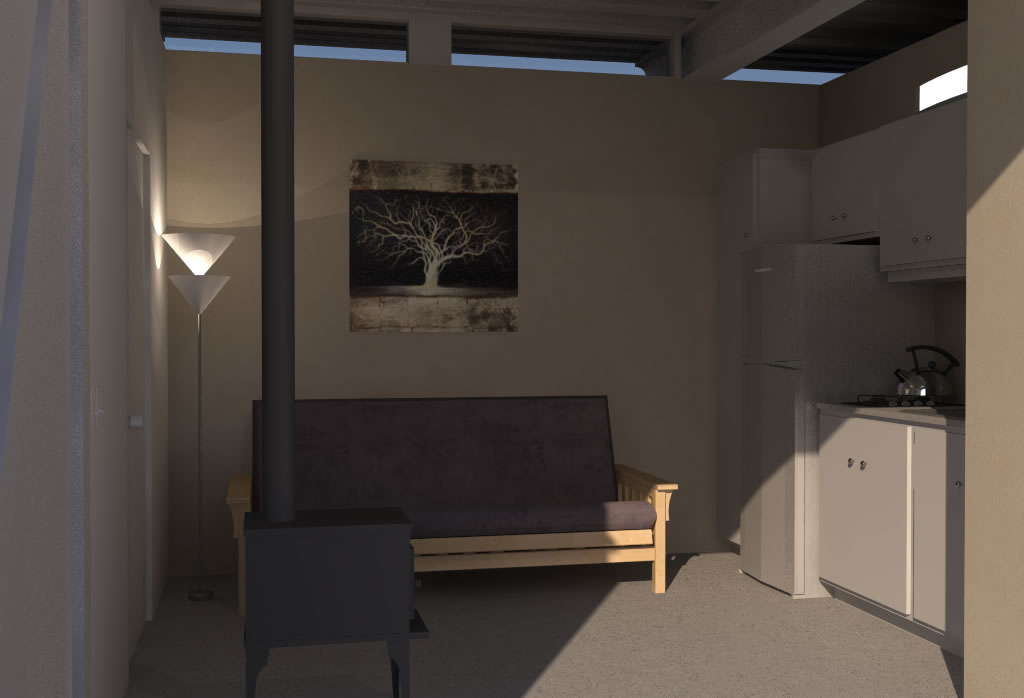 A gabion is a metal cage (box or cylinder) filled with rocks (debris, concrete, gravel, sand, etc). Normally these are used as retaining walls in big & small landscaping projects. You might also hear the word hesco used with the word gabion. Hesco is a company that makes gabions used by armed forces as walls to protect soldiers from enemy fire.

I spotted a video on YouTube that showed the assembly of such a gabion that was used as a gun emplacement. It had walls, a doorway, window opening, and roof – just like a house. You can watch that military gabion shelter assembly video online.

So the thought popped into my head… why couldn’t a house be built from gabions? The building materials would be simple, wire gabion boxes, fill material, road base gravel for the foundation, a bit of concrete, your choice of roof, some stucco, and interior finishings.

In this imaginary example the interior space is very small, in fact just 135 square feet (9’x15′). It has a bathroom, kitchen, sofa bed and wood fireplace. A larger space could theoretically be built without adding much to the materials list so let this tiny space serve to get your imagination rolling.

So just for fun I’ll take a crack at describing the steps needed to build a tiny gabion house.

1. Dig a big trench. The depth would depend on your local frost line. Retain the excavated material for filling of the gabions. A lot more fill material will be needed so when you cut-in the road to your imaginary rock-filled desert property be sure to make a pile of rock and fill near your future construction zone.

2. Fill the trench with road base. Road base is a special mix that doesn’t compact – which is why it’s used on roads and railways. Also be sure to run your rough plumbing, sewer lines, and electrical lines before completing the foundation work.

3. Start stacking and filling your gabions. Shown here are 27 3’x3’x6′ (two cubic yard) gabions, and a 3 3’x3’x3′ gabions; so you’ll need 57 cubic yards of fill material. The walls are thick for strength. As you build the walls you’ll want to rough-in any desired electrical or plumbing. Not shown here is a concrete bond beam that could be poured on top of the walls to add strength.

4. For the roof I’ve shown how a heavy-duty concrete roof might be poured on top of corrugated floor decking, which are metal panels are used in commercial construction. When combined with a thick layer of concrete they provide a sturdy surface that can actually span some distance. The floor deck panels in this drawing then sit on top of I-beams which lay on top of the gabion walls. A wood roof could be built instead.

5. Now that the roof is on you’ll want to pour a concrete floor. A sealed earthen floor could also be used.

6. Once you have the shell and floor complete you’ll want to close it in with windows and doors. I’ve shown a large glass door on the south side and some high transom windows for ventilation and light.

8. Last but not least, finish up the interior and move in.

I have no idea what a planning department would think of something like this. I also don’t know what would be needed, if anything, to make it earthquake safe. But I do know that this would be one big heavy stout tiny house that would provide more protection from the elements from most.

These drawings were made using SketchUp and rendered with Podium V2. For a closer look download the Gabion House SketchUp drawing.