Home
How To
How to Design a Nuclear Fallout Shelter 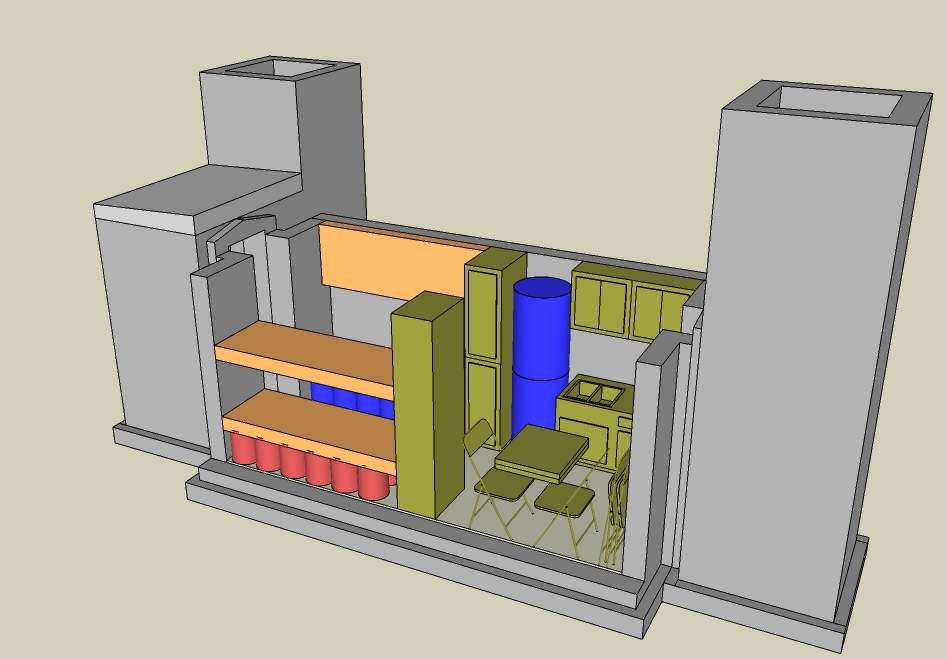 Nuclear fallout shelters have been stigmatized as the ultimate prep for the paranoid and the butt of many jokes. But now that we’ve all been reminded that nuclear accidents can happen, nobody is laughing anymore. My hope is that nuclear preparedness becomes a topic we’re more comfortable talking about again. I’d hate to see us succumb to fear mongering and instead educate ourselves, prepare for the possibility, and work toward eliminating nuclear power and weapons.

The Cold War seemed to create a general misconception – that a nuclear incidents are not survivable. So most folks just gave up on the topic assuming there was nothing we could do. Even well-intentioned documentaries like Countdown to Zero tend to leave the viewer with a total sense of dread and hopelessness. The truth is that reactor accidents and blasts are survivable because radioactivity diminishes faster then we might think. After the initial incident those that stayed sheltered would be left to rebuild, just like those who survived the bombings of Hiroshima and Nagasaki. Life would eventually return to a level of normalcy.

A misunderstanding of half-life might also be contributing to the general confusion about radiation. Reactor waste (like fuel rods) takes thousands of years to decay; but fallout from a nuclear blast can return to safe levels (for evacuation) in as little as three to five weeks. This mix up, and Hollywood, are probably the culprits for the spreading of the idea that nuclear fallout will destroy life for thousands of years – which is nonsense.

This doesn’t mean we should allow the continued proliferation of nuclear reactors and weapons unless we want to eventually move underground, but while we are busy demanding the end of nukes, we should also be educating ourselves about the necessary tools and techniques for surviving nuclear accidents and blasts.

I’m not an expert fallout shelter designer, but the basics are easy to understand. So now that we’ve all been reminded that radiation from nuclear fallout is all bad, lets move onto fallout shelters.

The basic design principals are simple. The more mass and/or distance you put between you and radiation the better. A useful analogy for understanding the nature of radiation is to think of it as heat you can’t see, feel, hear, taste, or smell. The farther you are away from any heat source, and the more stuff between you and the heat source, the less likely you are to be burned.

It’s also important to understand that the amount of time you’re exposed to radiation the more of an adverse affect it will have on your body. So while the amount of radiation currently coming across the Pacific is insignificant, over time it could be a bigger problem if the source is not contained.

Since we can’t detect nuclear radiation without special instruments we’re vulnerable. For civil defense purposes there are two primary types of meters, survey meters and dosimeters. A survey meter (like a Geiger counter) detects the amount of radiation currently present. A dosimeter tells you how much exposure you’ve had over time. Both are useful because the survey meter can alert you to the source and intensity of a danger while a dosimeter can tell you how much total radiation you’ve received.

Unfortunately very few people have access survey meters or dosimeters. To make matters worse store shelves are currently bare as a result of the nuclear accident in Japan. As soon as supplies become available it might be a worthwhile investment and there are some low-cost options like the NukAlert and the RADSticker. But I also suspect a whole new generation of civil defense meters will flood the market as companies work to meet the renewed demand.

This illustration, found in a recently published guide from The U.S. Department of Homeland Security, shows the safest places to take shelter in buildings. As you can see the deeper you are inside a building, surrounded by the mass of the building and/or ground outside, the safer you’ll be. This is a good tactical strategy to know in an emergency but also a good visual teaching tool for understanding what is needed to shield yourself from radiation.

As you can see from the illustration above, typical homes provide little protection against radiation. This is simply because most of our homes are built from relatively lightweight materials. Below is an illustration I whipped up based on shielding design information available on Wikipedia.

Some materials shield against radiation better than others. Each of the wall thicknesses below shield the same amount of radiation. Lead provides the thinnest wall while packed soil provides the most cost effective wall, albeit at 3-feet thick compared to 4 inches of lead. For more information see this wikipedia article on radiation protection. 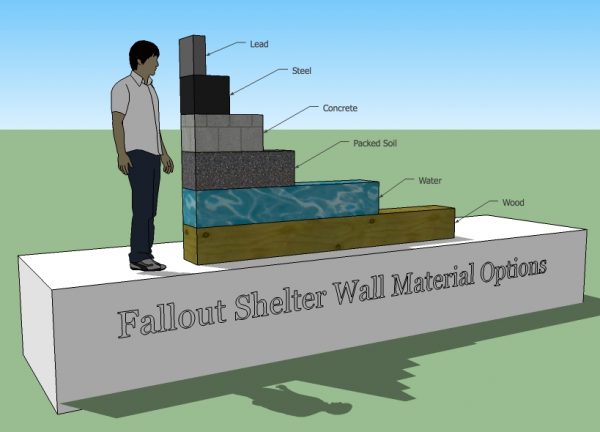 The drawing below shows three ways to build a house, kind of like the the story of The Three Little Pigs.

In an article titled, U.S. Rethinks Strategy for the Unthinkable (December 2010), The New York Times reveals that the U.S. Government is now recommending that people should stay inside until we’re told it’s safe to go out – instead of making a run for it – even if you’re home is a flimsy box.

So just to recap, the basic shelter requirements are:

Below is an illustration of a shelter I whipped up using information from the available sources as guides. To build an underground shelter like this would require some careful engineering and construction expertise – so please do not attempt to build a shelter solely from what you read here. Do your homework and due dilligence before embarking on any project with a multi-ton roof. A roof cave-in will hurt you faster than radiation.

It’s one room with two entrances. The room is 6′ 8″ wide and 12′ 8″ long, which also ironically happens to be about the size of many trailer-based tiny houses.

The design is intended for a family of four. At one end is a set of fold-down bunks that could double as seating space when the family is not in bed. Below the bottom bunks would be space for food and water storage in 5-gallon buckets.

Dividing the bunks from the main living space are two tall cabinets (or lockers) for the occupants’ possessions, which would be mostly clothing, books, and personal items. These items, as well as the food and water, would need to be stocked and stored prior to a disaster so that the family could escape to the shelter as soon as a threat was detected.

The toilet (bucket-style sawdust toilet) would be located in the main entryway just outside the interior shelter door on the bunk-side of the shelter. The toilet end of the entryway would be as well shielded from radiation as the main shelter but would provide a little more privacy from the main shelter. The potential oder from the simple emergency toilet would also carried outside by cross ventilation.

Air itself doesn’t become radioactive, the problem is the radioactive particles in the air. So the air entering the shelter must be filtered to prevent fallout particles from being carried inside. Some suggest that one micron filters be used but others say 90-degree turns in hallways and ducts are sufficient. A non-electric ventilation option is a Kearney Air Pump.

The doors and hatches would need to be vented to allow the cross ventilation. Low voltage fans would be needed to keep the air moving. Air would enter the shelter through the rear (smaller) entrance. It would cross the main shelter and then escape through the main (larger) entrance. Both entrances would provide a space for washing-off contamination before entering the shelter. The runoff water would need to be carried away by a drain or pumped outside since it would contain radioactive particles.

This brings up the issue of electricity. In an actual emergency the likelihood of the electric grid going down is high; so this tiny shelter would need to be completely off-the-grid and powered by external solar panels or human power. Solar panels would run the risk of being covered with fallout, so some kind of human power generator backup would need to be available. The reliance on electricity would need to be limited to lighting, ventilation, and communication simply due to the lack of power.

Another item to stock would be heating and cooking fuel. While subterranean structures naturally regulate their temperature, they are not typically warm unless some kind of passive solar heating or artificial heat source is used. In a space this small the occupants’ body heat may actually make the interior fairly hot after some time has passed. But having a way to heat the shelter with a clean-burning fuel would be a good idea too.

The shelter I’ve drawn here could be expensive to build and truthfully, the whole neighborhood would know you built it due to the size of the hole. So I’m guessing that most folks aren’t going to be building this kind of purpose-built fallout shelters.

I suspect most people will want something that will provide multiple functions. They’ll probably be modifying their current homes or building outbuildings with more shielding than their current homes. Here are some examples of small buildings I’ve some across in the past that would make decent fallout shelters.

There isn’t a whole lot of information out there about nuclear survival. Here are some good places to start learning.

Did I miss something?

If you’re an expert on the topic please contribute by commenting on this post. My intention is to help educate and help lessen the taboo on the topic of nuclear disaster preparedness. Thanks!