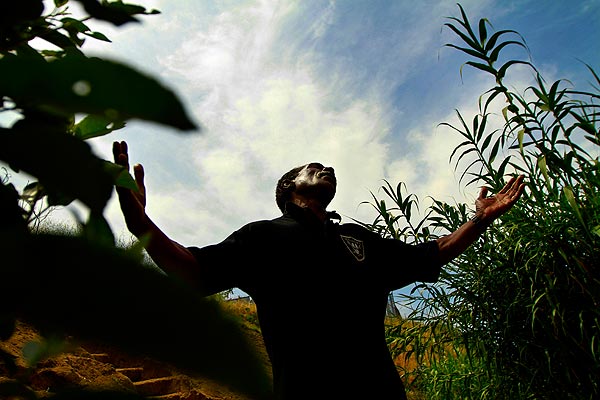 One of my long-time regular readers, Dav, sent me a link to this tonight. It’s the story of Charles Ray Walker, a.k.a. Bamboo Charlie, who lives in a tiny plywood shack in Los Angeles. They say he’s homeless but from what I can see, he has definitely carved out an amazing home for himself.

In 1992 while panning for gold in the L.A. river, (lost rings, chains, coins), he spotted a patch of bamboo and decided to investigate. The property owner told him he could stay if he kept the place clean. Charlie did more than that, he created a secret garden of peace, safety, and pride. He created a home.

I wonder how many people would thrive if they were simply given permission by society to exist and live. It seems that too often people who don’t live up to society’s expectations are shunned as failures. I don’t think they’re failures, I think our society’s expectations and values are screwed up and our money games are a terrible measure of true net worth.

I was really moved by Bamboo Charlie’s story. It might be because I know several people who are feeling the pains of societal pressure crushing down on them, or maybe it’s because Charlie’s words are so true, or both. In any event, I highly recommend spending a few minutes reading his story and watching the short video at the L.A. Times website.