The world of recreational vehicles is vast. You can select anything from a tiny campervan built in the 1960s to a 40-foot long Class A rig hot off the manufacturing line. But one distinction is important in the RV world, is it self-contained or not?

The vast majority of RVs are self-contained, but not all of them. Understanding what this term means is the first step to take before considering an RV purchase. 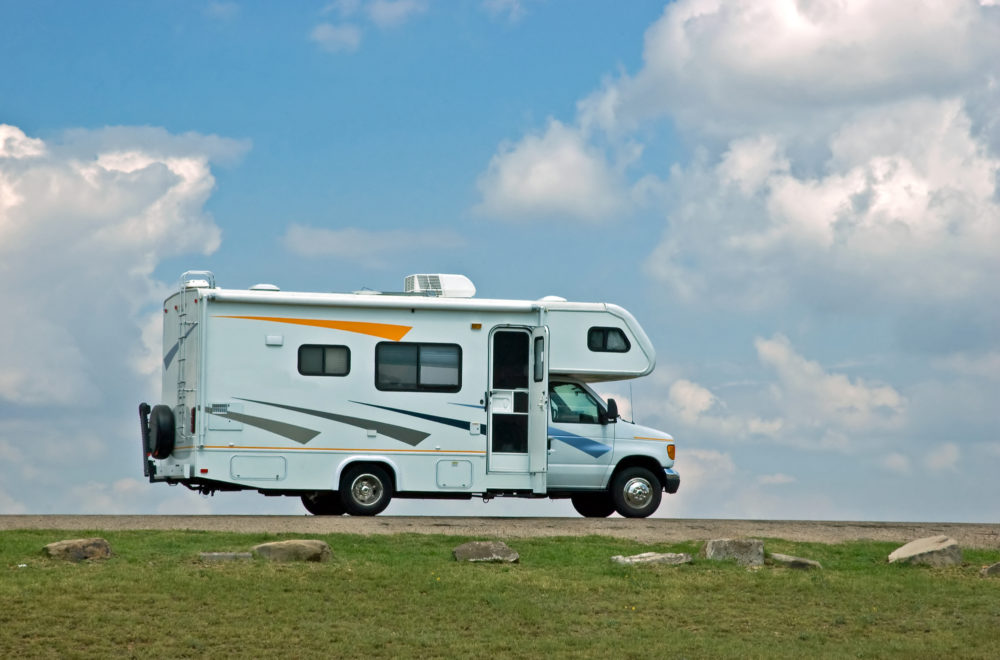 This post covers everything you need to know about self-contained RVs. We’ll begin by defining the term and go into more detail about what it means in the real world, including the primary options, costs, and concerns.

After reading this, you’ll have a much better understanding of the RV world and what it offers in today’s world with the latest technology.

What Does Self-Contained RV Mean?

Self-contained RVs have everything they need built into the vehicle and do not rely on outside sources to cover basic needs. While many camping areas offer bathrooms, water, and electricity, self-contained RVs do not need any of these.

To quality as a self-contained RV, there are a few essential components such as:

There are many ways to include these three things in a self-contained RV and we’ll go into some of those in detail.

Some might say electricity isn’t necessary for a self-enclosed vehicle. But as many water systems and RV functions depend on electricity to work, most consider this essential to a self-contained RV.

The main benefit of self-contained RVs is that they do not need to be near any amenities or utilities to function. Since everything you need is inside of your RV, you can opt to go off on your own and park anywhere you desire.

They’re also great for times when the weather is poor. If you can use the restroom and have running water inside your vehicle, you can avoid the hassle of facing harsh weather.

Some campgrounds require you to be self-contained, even if they have bathrooms. This usually means they require gray water tanks so that you aren’t spilling water with soap, food, and other contaminants on the ground.

Where Can You Use Self-Contained RVs?

You can use self-contained RVs nearly anywhere staying overnight is allowed. Since they don’t rely on anything outside of the RV itself, it doesn’t matter where they are, whether it’s the middle of a forest or beach, on a friend’s driveway, or at a traditional campground.

One of the best types of camping for self-contained RVs is dispersed camping, also known as wild camping and boondocking.

All three terms mean you are camping away from others, usually on public land. There are no amenities, such as bathrooms or hosts, and you need to be fairly self-sufficient.

There are many rules to follow about overnight parking and camping throughout the United States and other countries, so it is crucial to understand those before venturing out to go dispersed camping. Having a self-contained vehicle makes this much easier.

How Does a Self-Contained RV Work?

One of the most defining features of a self-contained RV is the toilet. And there are essentially three different types of toilet designs that exist today. These are flushing toilets with a black tank, cassette toilets with a small holding tank, and composting toilets.

A lot of larger RVs use a flushing toilet with a black tank. These are similar to home toilets, with a bowl of fresh water that is flushed into a sewage-like area. The sewage collects in the black tank until it needs to be emptied at a dump station.

Cassette toilets do not use water at all. They are devices with a small sewage tank built within the toilet, often with a capacity of between two to twenty uses. One dumps the cassette out when necessary in an appropriate location.

Composting toilets are an innovative solution. The solid waste combines with a composting material, allowing for higher capacity than cassette toilets.

It’s crucial to understand the rules and regulations for proper disposal or to finish the composting process.

The other function usually considered an essential element of a self-contained RV are the tanks that make up the water and drain system — this includes one tank that holds the freshwater used for drinking and washing, plus a gray tank that collects the dirty water from the drain(s).

Since most water systems and pumps require electricity to work, electricity is the final element of most self-enclosed RVs. This can be in the form of a generator, solar panels, or alternator powered by the RV’s engine.

What Does a Self-Contained RV Need?

A self-contained RV needs a toilet, a functioning water system, and an electrical system. It is basically like an off-grid cabin on wheels.

For traditional RVs from major manufacturers, most install a flushing toilet with a black tank. They place a toilet in an enclosed restroom inside the RV, and the black tank is underneath the vehicle with a drain spout.

For some smaller RVs or self-built ones, the toilet might be a cassette toilet placed in a cabinet or other hidden area. Some choose to put an enclosed bathroom in their small RVs.

Composting toilets are about as portable as cassette toilets and don’t need a water hookup. But they usually have a hose that needs to vent outside the vehicle.

Water systems, like toilets, can come in many varieties. Large, traditional RVs usually have fresh water and gray water tanks mounted underneath the vehicle and plumbed throughout the RV.

Smaller RVs, especially Class B van-based ones, might come with fresh water tanks are located and plumbed completely inside the vehicle. They can still connect to an electrical pump, but some choose a foot pump operation, as often seen on sailboats.

A gray tank might be under-mounted or could be located inside.

The electrical systems in self-contained RVs can vary dramatically in design.

Many modern self-contained RVs use solar power as a primary energy source unless the power needs include high-powered devices such as air conditioning and microwaves.

In RV designs before solar panels were popular or where high energy needs exist, they rely on gasoline or diesel generators. However, generators are becoming less common as solar energy technology improves.

You can also connect your electrical system to the engine and alternator of the RV, which provides power when the engine is on, whether the vehicle is driving or stationary.

Shore power is allowing charging from an outlet. Common in RVs, it is usually not considered part of the self-contained system since it relies on a third-party power source. 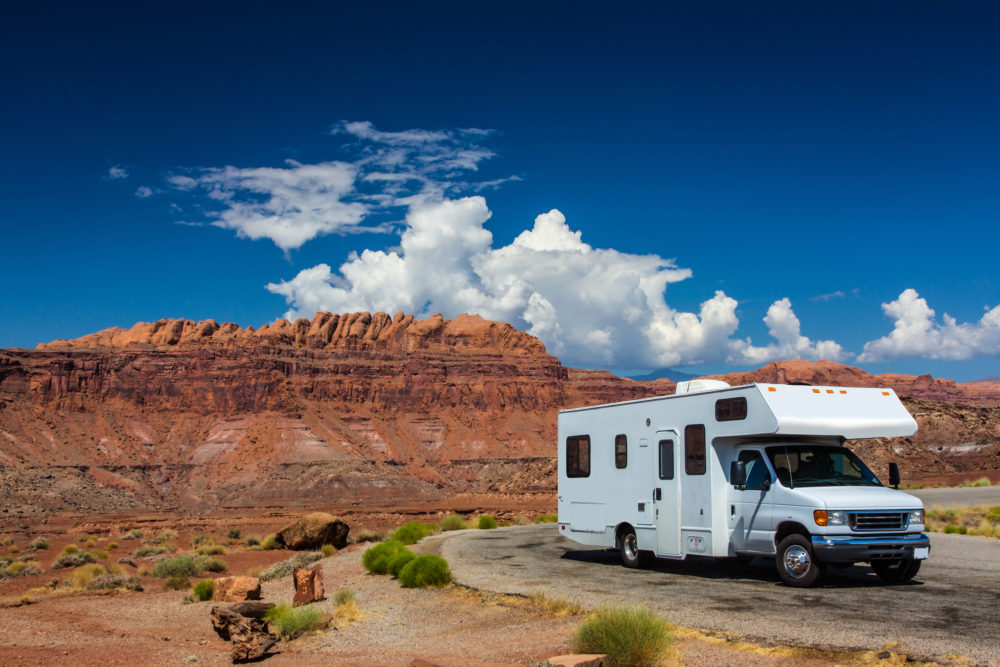 How Much Does a Self-Contained RV Cost?

Self-contained RVs have a wide price range. On one end of the pricing scale, Class A RVs are built on bus-like frames and can cost hundreds of thousands of dollars. Ultra-luxury ones can even sell for more than one million dollars.

On the other end, Class B RVs are built on van platforms. While not all are self-contained, many are. These can cost anywhere from $10,000 for a used, home-built one and up to $200,000 or more for professionally-built models.

Against intuition, Class C RVs are between Class A and B in size, usually on a more box-truck-like platform. These usually have a more traditional RV design with flushing toilets and holding tanks for all three types of water/waste. The price on these ranges dramatically, but usually is somewhere in the $75,000 to $200,000 range.

Some people go directly to RV vendors for their needs because they give you a professional design, engineering, and construction with warranty programs or service assistance.

On the other hand, you can look toward resellers or independent manufacturers. This can be anything from local classified listings such as Craigslist or Facebook and smaller dealers and custom builders.

If you want to try out a self-contained RV of any type, renting is an excellent place to begin. You can test to see if the cost and maintenance are worth it. Nightly rental prices for self-contained RVs usually start around $200 per night, but are generally closer to $300 to $400 per night, plus cleaning fees and taxes.

Is a Self-Contained RV Worth It?

But if you want to escape from campgrounds and be able to go off on your own, then they are a great way to explore. If you have a self-contained RV, you can go anywhere you can legally stay for the night and enjoy yourself.

It’s not always practical for everyone to buy a self-contained RV. Not only can the initial cost be high but also ongoing maintenance fees, storage concerns, and insurance costs.

Here are some of the most frequently asked questions about self-contained RVs.

What is the smallest self-contained RV?

The smallest self-contained RV is a Class B RV made on a van platform. While Mercedes-Benz Sprinters are now becoming the most popular van platform, the Volkswagen Bus, also available in similar Vanagon or Westfalia models, is much smaller and can be self-contained.

Are all motorhomes considered self-contained?

Not all motorhomes are considered self-contained. Some do not have toilets, meaning you need to rely on an outside source for using the restroom.

They also don’t all come with water holding tanks, sometimes needing outside water or disposal systems.

Most travel trailers, also known as pull-behind campers, are self-contained RVs. While they might rely on a truck or SUV to tow them down the road, the self-contained aspect usually refers to what is inside the RV, including a toilet, water tanks, and electricity.

Almost all travel trailers have these features and therefore meet the definition of a self-contained RV.

Is a pop-up camper considered self-contained?

It depends on the pop-up camper. Some have a basic bed and seating area, with no toilet or holding tanks. But other pop-up campers are considered self-contained because they have toilets, holding tanks, and possibly electricity if the water system needs it.

How long can you live in a self-contained RV?

You can live indefinitely in a self-contained RV. While unconventional, some people leave behind the standard home construction style to live in a way that provides more effortless travel. Finding a legal place to stay for long periods can be challenging, often depending on local rules and regulations.

Can a self-contained RV go off-grid?

However, the time they spend away from the grid might depend on how large their holding tanks are and their electrical system setup, with some lasting days and others lasting many weeks or months.