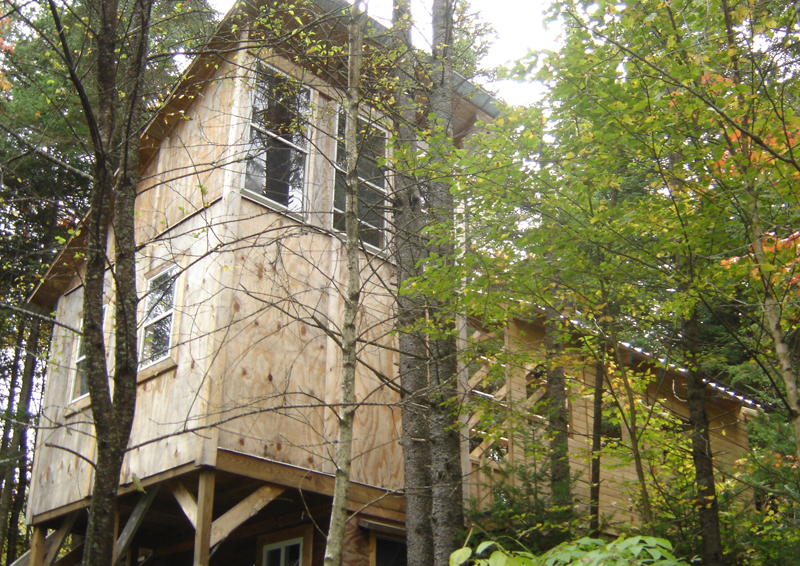 I was recently contacted by a fellow named Derek Alexander Diedricksen who is in the process of writing a book called, “Humble Homes, Simple Shacks, Cozy Cottages, Ramshackle Retreats, Funky Forts, and Anything Else We Could Squeeze in Here.” It’s due out before the end of the year and you can actually preorder it from Derek by emailing him at [email protected].

Derek saw the article on my pallet construction method that Mimi Zeiger, the author of Tiny Houses

, had written for Readymade Magazine, and wanted to include a piece on my pallet house in his book. Of course that sounded great to me. Then Derek and I continued our email conversation on tiny houses and it turned out that Derek is quite a scavenger-builder himself.  This is his cabin in Vermont made mostly form scrap, scavenged, and salvaged building materials. 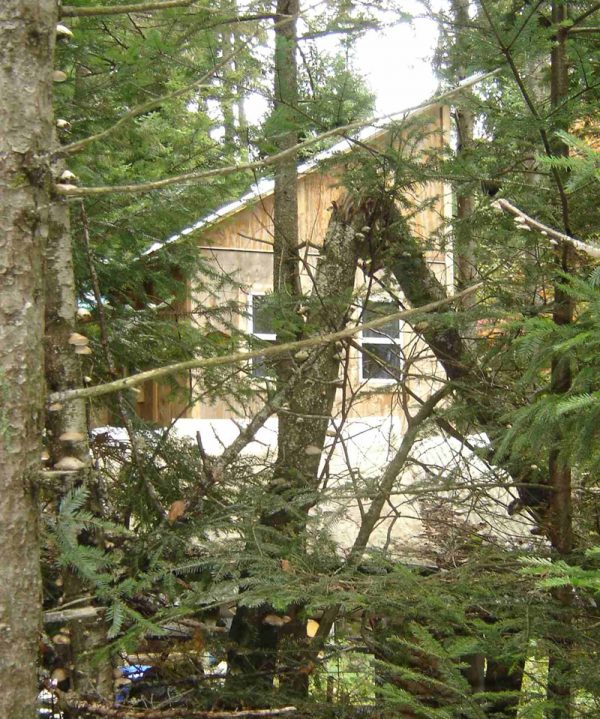 Here’s some of what Derek shared with me:

The cabin was mainly built by myself, my brother Dustin, and my wife Liz. I bought the land up in the Northeast Kingdom of VT back in 2000, when I was 23, and built it on weekends here and there. When I could make the 4-hour drive we pecked away at the cabin mostly by hand. We used no power tools until we had to cut/rip plywood sheets.

A decent portion of the plywood on the structure was donated by a neighbor who worked for a fire salvage/demo company in Vermont. A good many other parts and materials of the cabin were found curbside like all the windows except one.

Most of the other materials were purchased from mom n’ pop mills up in Vermont where bargaining down a price and haggling is welcome. You gotta love that! I bought the 7 true-2 by 8 cedar roof rafters (each initially 15 feet in length), for a mere $40 at one mill. The entire staircase and deck leading to the cabin’s entry was built out of bargain-pile/grade 3 cedar amounting to a little over $50.00.

The cabin’s main room is 10′ by 10′ and has a one-pitch and a loft above that is accessed by a ship-galley-style ladder (also built from local cedar, etc). There’s a storage and sleeping area beneath its raised pole structure that we’ve dubbed “the coffin”. This tiny room is only 5 by 10 feet in size, with 5 feet of “standing” room (one small door and a tiny window). All in all the existing cabin has approximately 200 square feet of useable space.

In some photos you can see the “new” unfinished backend of the cabin where we’re adding on a new 12 by 16 room, with a 10 foot cathedral ceiling. All the walls for that structure (as I now have 2 kids and less time to make it up there) were prefabricated in my Massachusetts backyard and simply “lego’d” together on site.

It worked real well, all the siding is tongue and groove cedar too, and cost me no more than $100 for all the wall work. As far as prefabbin’ things: This way, it took only two weekends to get both the walls, and the roof assembled. All in all, when complete, the cabin will stand at 384 square feet, give or take.

It’s entirely furnished in curbside furniture or castaways from family. The locals have dubbed it the “backwoods skyscraper” as being built on a hill and it’s 27 feet tall from the lowest point of the hill to the highest peak of the cabin. As for the metal sheeting wrapped around the base of the cabin, later earning the cabin a nickname “the diner” by my brother, is the only peaceable way we’ve been able to keep the porcupines at bay.

There’s an outhouse down the hill, which has long been called “old ironsides” after the porcupines came close to leveling it. Its now completely clad in corrugated roofing!

We have no running water, no electricity, and we try not to allow radios or any “newfangled” gadgets up there when we’re camping – as it ruins the solitude. We do plan on driving our own wellpoint at somepoint and with a stream and swamp/pond on the property we feel we have a decent enough chance at hitting water within 20 to 30 feet of the surface.

All in all, its a 10 acre spread with the nearest neighbor (“Uncle Bob” we’ve dubbed him, a true 70-year-old jack of all trades (and lender of MANY tools)) being 1/4 mile away.

I must say that I hear more and more good success stories coming out of Vermont. It seems that many people are finding a lot of flexibility and freedom up in that neck of the woods. Thanks for sharing your story Derek and I’m really looking forward to the book. Good luck with those porcupines too 🙂

P.S. Derek also has a band, in case you were curious to see what he does in his spare time. Check out Boston Rage.