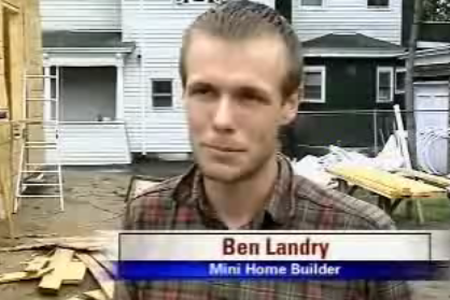 A few days I posted a short blurb on a fellow named Ben Landry in Binghamton, New York who is building a 250 square foot tiny house. I’ve not been able to make contact with Ben yet but I did a little research and was able to dig up some good information on Binghamton’s building codes and zoning which shed some light on how Ben was able to get permits for this tiny house approved. I also found this interview:

I suspect he may have gotten approval for a variance because it looks like the minimum lot area for one unit on an R-2 zoned property is 6,000 square feet. His lot is only 3,750 square feet. But the minimum lot area for R-2 is 3,500 square feet when two dwelling units are build… so logically there would be a good argument for the variance especially since the home is so small. I could find no dwelling unit minimum in the zoning ordinance for the City of Binghamton.

It also sounds like Binghamton is working to revitalize the local economy though some carefully chosen zoning changes. If this is the case then it would also make sense that the planning department is open to people like Ben who want to build their own home.

Fees are also extremely low. I’m not sure if there are any additional fees assessed by the county but the construction fee schedule for the City Of Binghamton states that there is no fee for the electrical permit, sewer permits are $10.00, and construction fees are ½ of 1% of construction cost, with a minimum fee of $10.00. Plumbing fees are $5.00 plus $1.00 per fixture.  So if I did my math right that would put Ben’s total permit fees at less than $100.

If your jaw just hit the floor you’re not alone. It sounds like the City of Binghamton has eliminated fees as an obstacle for someone who wants to build a house.

The newspaper and television stories report that Ben went to Binghamton University and studied sculpture. His house will have most or all major appliances like an air conditioner, washer and dryer. His property taxes will be about $600 a year. The lot cost him $5,000 and he expects to spend about $8,000 to build his house. By the end of November construction should be finished and Ben should be living in his new tiny house.

The most common questions I get from people are centered around how to overcome restrictive local building codes and house size minimums. Running across a success story like Ben’s is great and shows that there are communities open to tiny house owner-builders.

I think the trick to finding them starts with a little research online. It’s amazing how easy it is to find zoning maps, permit fee schedules, local ordinances, for even the smallest communities. Many times these are controlled at the county level and in other cases at the city level. Sometimes you’ll even need to look at both city and county rules.

Then to further your research try calling the local building inspectors and ask if you can throw a hypithetical situation by them. Ask questions about home size minimums in different zones and tell them you’re considering building a small house and just want to know how small you can go. Often you’ll be able to find a friendly building inspector who can spare a few minutes.

I’m guessing Ben filled out his one page building permit application, drew up some simple plans, and walked his small fee into the planning office and got his approval. I bet the variance I described above was virtually a non issue. I also bet the folks in the planning office got a kick out of the 250 square foot plan, that’s not something you see everyday.