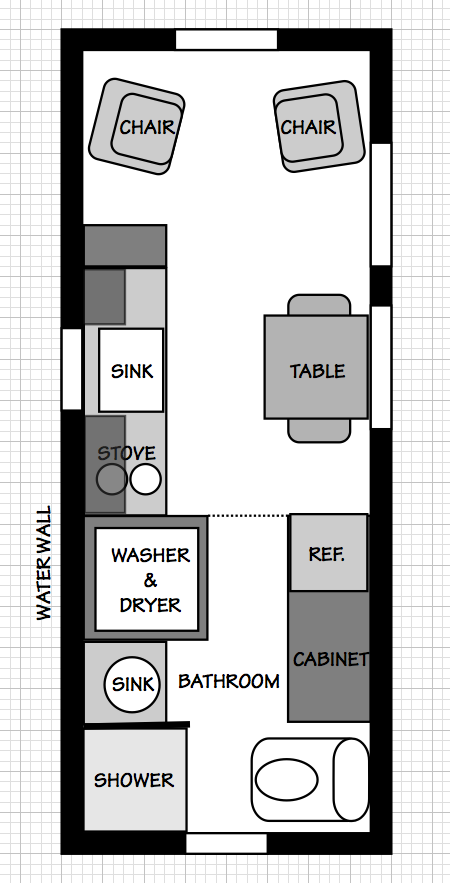 I’ve been playing with more drawing software in an attempt to find the right combination of tools to draw the illustrations for the Tiny Simple House plan book. Below are 3D images made with Google SketchUp and a short video. The floor plan was created using software called VectorDesigner which is an inexpensive ($70 ish) program similar to Adobe Illustrator, but far simpler. I haven’t bought VectorDesigner yet; I’m still using it in it’s 14-day trial mode, but so far I really like it.

I’ve posted a few other drawings of this design concept so you may be familiar with the idea already. Basically it’s a simple low-cost house shell most owner-builders could tackle themselves. Instead of interior walls, floor-to-ceiling cabinets would be used to separate spaces. The floor plan above is intended to show how the raw space could be filled. How the owner really fills the space would be entirely up to their needs. Future changes to the interior could also be made as their requirements changed. Additional small buildings could also be built if more space was needed, for example when the kids get a little older.

I’ll try drawing the cabinets in 3D this nect week. The 2D drawings really don’t tell the cabinet story well enough. I’m starting to think that 2D drawings are great for construction drawings but 3D is best for telling the story and communicating the design.

Another main feature of the concept is that the entire house could be loaded on a trailer for transportation. The main idea here is that flexibility and portability can be a real asset in lean and prosperous times. Since tiny houses are small by definition it seemed only logical to design this tiny house so that it could be moved. Tiny houses are very different from most portable small homes, like travel trailers, in that they are built like houses. Someone could even place this house on a permanent foundation once they found a place they wanted to stay for a long time.

The house in this drawing is 8′ by 20′ but I plan to include 8′-wide and 12′-wide plans in the book. The length of the house would be determined by the owner-builder’s need and length of the trailer. I’ll also include several different plans for the built-in cabinets to make it easy for someone to customize the interior space to fit their needs. I’ll post updates here as I work out the details.

The video below is simply a screen capture as I manipulated the 3D drawing on my screen. If you haven’t tried Google SketchUp yet and you like playing with drawing tools on your computer give it a try. Be sure to watch the training videos first though.