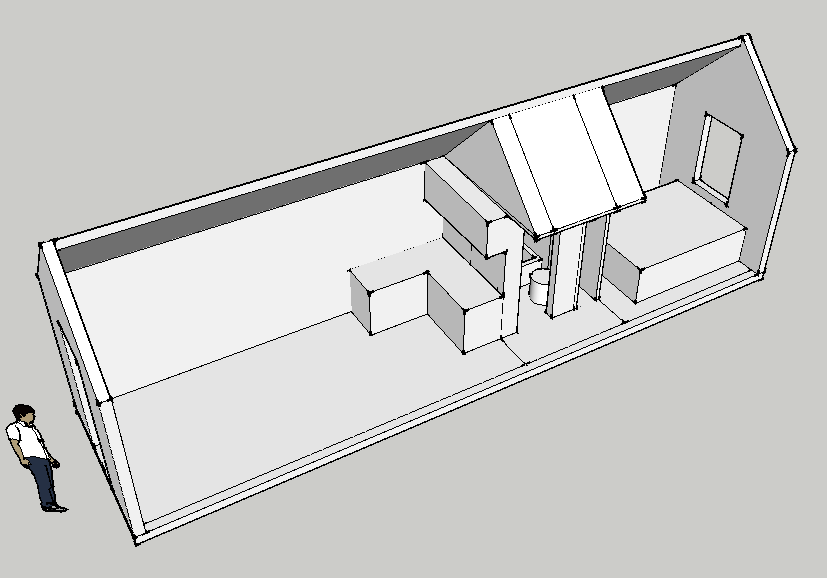 I should really stop staying up so late, but I guess I just can’t help myself. Below is another 3D drawing using Google SketchUp. I’m getting a little better with it but I know the drawings are still a bit primitive compared to the pros, but I can definitely see how drawing in 3D can really help visualize an idea.

For the past three months I’ve been working on a design concept for a book I hope to self-publish using Lulu.com called the Tiny Simple House. The book would be a guide for building a tiny house and include all the plans you’d need to built it yourself. I imagine that there is an increasing number of people looking for a simple and inexpensive way to provide shelter for themselves.

When I first posted the idea here I imagined a modified shotgun house made up of different sized boxes, 8′ by 8′, 12′ by 12′ and 16′ x 16′. But as I worked on the plans I quickly realized the idea was not so simple and quickly became not so tiny. The idea that the house would have to sit on a foundation also started to bug me because that seems like the biggest impediment for most owner-builders because it involves building permits and buying land. I realized that the tiny simple house had to be portable, low-cost, and super simple to build.

I went back to my mental drawing board and realized that a traditional shotgun house that could be moved on a trailer would actually meet all my requirements. It’s a bit ironic that going back to a simple row house, albeit a portable one, was really the most local solution.

Pictured here is an 8′ wide house that is 32′ long. The actual interior square footage would be around 220 square feet. There are some details missing like windows, which the final design would have. Instead of interior walls cabinets would provide room dividers as well as storage. All the plumbing would be in the same area of the house making it easier to build. The structure is simply a floor, four walls, and a simple pitched roof.

I also imagine including a larger version of the same house in the book, at 12′ wide and 40′ long. The smaller house could theoretically be pulled by a full size pickup without a special permit in most states. The larger house would most likely need a special permit and larger truck but would still be portable much like a mobile home.

This is clearly not a new idea. The smaller house would be like a really long Tumbleweed-like house and the larger house would be more like a homemade park model RV. I think the main difference is that this could be less expensive and would still meet most people’s needs.

What do you think? Is there value in this approach? Did you like the original concept better?

Here’s a little video that provides a better look at the 3D drawing. Don’t worry, the final design would have windows 🙂