I’ve got a hobby – a weird one – and its the study of fallout shelters and nuclear war survival. I’m Gen-X and grew up during the cold war. So for fun – and maybe as a weird sort of therapy – I started learning about fallout and nuclear war as a teenager.

The most important thing you should know is that nuclear war is totally survivable. Hollywood disagrees – but once you learn a few facts about the fallout from a nuclear bombs you’ll see what I mean.

It’s impossible to determine what kind of nuclear war could possibly happen (isolated, limited, global), but even in an all-out global nuclear war, the people that have build shelters and stored away food and water will survive – like our government.

In the event of a limited nuclear war – like if North Korea decides to use their small (by comparison) weapons against their enemies (mainly the USA) then the survival rate is exponentially better.

There are a few things fallout shelter should have, and most are pictured above. 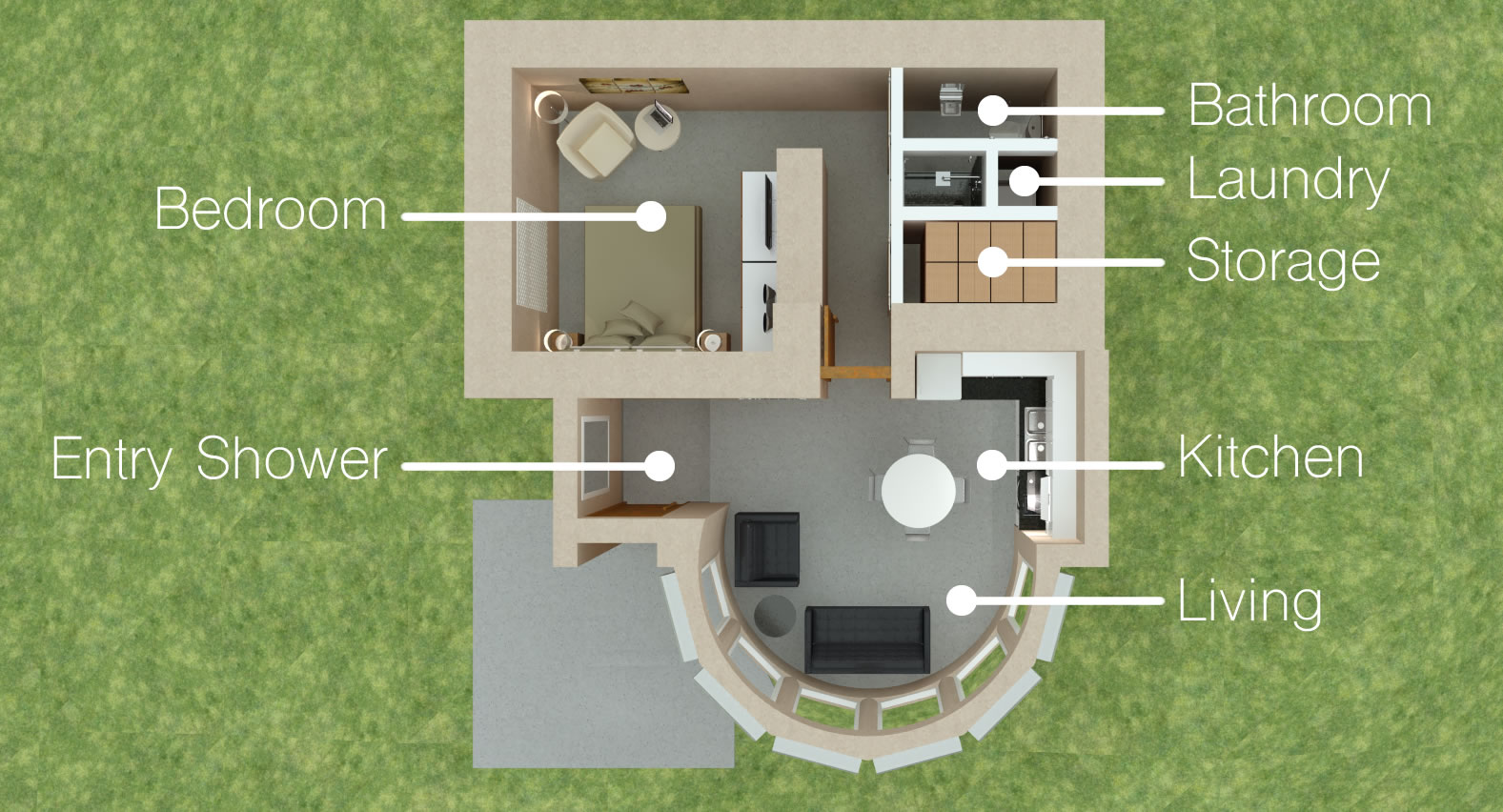 In the design pictured here I show a simple concrete home. It’s assumed that this house is located outside the blast zone. The main room with the windows would not be habitable right after the blast because the walls are only 1-foot thick and the windows block virtually no radiation. But the bedroom, bathroom and storage closet are well insulated (except for the hallway). Yes it’s true that the quick trip across the hall to the bathroom would expose you to radiation, it would be such a quick dash the exposure would be nominal.

The water for this house would be stored in large underground storage tanks behind the house. A well or rainwater collection could be used to fill the tanks – but a shutoff would need to be used after a blast to keep the stored water fallout free.

In the entryway of the is a hidden shower, so that if you needed to go outside before the fist 30 days were over, you could wash off any fallout before entering the shelter part of the home.

The big windows in the front of the house would also have roll-up security shutters to keep the house secure during a disaster and while you were away.

The following images show how normal this house could look, while still being ready for the worst case scenario.

View from just inside the front door. The entry showered is hidden behind a mirror so your friends don’t think you’re crazy.

The kitchen is tucked into a corner.

The living room is a simple semi-circle.

A better look at the kitchen.

The only weird thing about the bedroom is that there are no windows. To help avoid issues with fire codes, nothing in the structure can burn, plus the room has no doors and is open to the bathroom. The bathroom and storage closed doors are barn doors – not true swinging doors.

The bedroom and bathroom is where you’d spend your time after a nuclear war – waiting out the fallout. The two foot walls and roof keep the radiation out.

Here’s a shot of the bathroom. It’s tiny and simple. A combo washer/dryer unit hides behind the barn door next to the toilet.

So now you can have your cake and eat it too… after a nuclear war. You’ve got a house with massive thermal mass during peace times – which regulates it’s own temperature perfectly, and you’ve got a place to hide out in a worst case scenario. Talk about home security!

Questions, comments? Post them below. I’m a geek on this topic and if I don’t know the answer I can point you in the right direction.

UPDATE: A few folks have asked for plans. Since a structure like this would be subject to local building codes and zoning I wasn’t planning on making a full set of plans… but I’m happy to share more details and dimensions. If you want to build something like this I suggest finding a local contractor that specializes in concrete and show them these drawings. You might find that they can fill in all the gaps and details and build it for you.